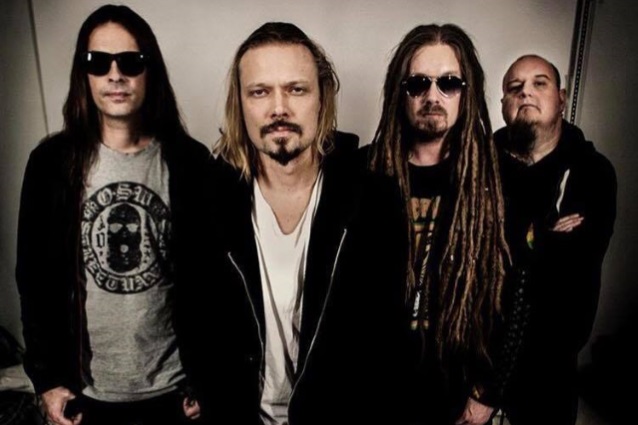 Former HIM And AMORPHIS Members Join Forces In FLAT EARTH

Based in Helsinki, Finland, FLAT EARTH is "anything but your run-of-the-mill 'supergroup," according to a press release. "The fearsome foursome is an ideal amalgamation of love for music, every bandmember's unique skillset and battle-tested charisma, completed with a dynamic of a band that has been playing together for aeons.

"The audible musical signposts point to the heydays of alternative rock, take a nonchalant bow to the forefathers of all things heavy with a pinch of wistful psychedelia," the press release continues. "Magnetically melodic, playful, exhilaratingly unconstrained and thoroughly permeated by vocalist Anthony's passionately melancholic overtones, FLAT EARTH delivers in the same parcel both the beauty and the beast.

"Gas and Niclas's robust-yet-subtle rhythmic dynamic work pave the perfect runway for Linde's guitar solos to freewheel and Anthony's maudlin-yet-contemplative singing that gives the band's sound a tint of mawkish desperation that sets them apart from any other band you've heard."

FLAT EARTH is recording its debut album at Finnvox in Helsinki with producer Hiili Hiilesmaa, who has previously worked with HIM, AMORPHIS, THE 69 EYES and APOCALYPTICA, among others. A label deal for the effort has not yet been secured.