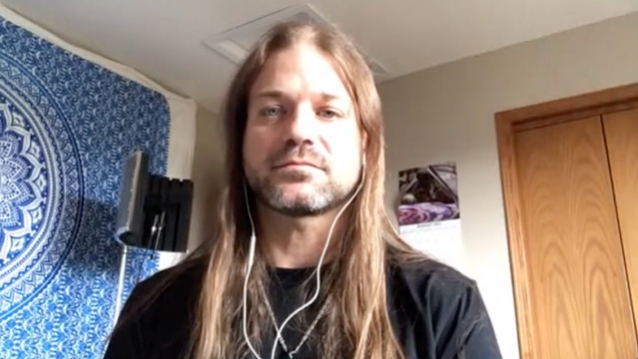 Former ICED EARTH singer Stu Block says that Jon Schaffer "fucked up real bad" when he got involved in the violent protest at the U.S. Capitol on January 6 that left several dead, including a Capitol police officer.

Four months ago, the ICED EARTH leader pleaded guilty for his role in the Capitol riot. Although he was initially charged with six crimes, including engaging in an act of physical violence and targeting police with bear spray, he pleaded guilty to only two charges: obstruction of an official proceeding of Congress; and trespassing on restricted grounds of the Capitol while armed with a deadly or dangerous weapon.

Block, the Canadian-born vocalist who had fronted ICED EARTH since 2011, officially quit the band in February, stating at the time it was "the best decision in many ways" for his "personal and professional growth going forward."

Stu addressed Jon's involvement in the Capitol riot as well as his departure from ICED EARTH in a brand new interview with Canada's The Metal Voice. Speaking about his former bandmate, he said (as transcribed by BLABBERMOUTH.NET): "We all make bad decisions, man, and [Jon] fucked up real bad. And I'm sure he knows it, and I think everybody with half a brain knows it… The line that was crossed with going in and all that kind of stuff… He had so much going on. It was a shame. It hurts, 'cause you've got plans, and all of a sudden, you can't tell someone what to do — you can't tell a very strong-willed individual what to do; you can't. And so it would be lost words."

He added: "At the end of the day, I don't hate him. I'm not writhing in hate for him. I feel sad. I feel bad that everything went down the way it did. And maybe one day we'll talk. I don't know. I'm not too sure. But I think he knows that I still have a place in my heart for him, because I've seen that man do a lot of amazing, wonderful things for people. But I just wanna move on. And that's what it is."

Following the initial reports that Schaffer was involved in the riot, his ICED EARTH bandmates distanced themselves from his actions. Block and bassist Luke Appleton later posted separate statements on social media announcing their resignations. BLIND GUARDIAN frontman Hansi Kürsch also quit DEMONS & WIZARDS, his long-running project with Schaffer. The allegations also apparently affected Schaffer's relationship with his longtime record label Century Media, which had released albums from both ICED EARTH and DEMONS & WIZARDS. As of mid-January, the Century Media artist roster page did not list either band.

Earlier this month, Block announced his permanent return to his pre-ICED EARTH band INTO ETERNITY.

Before joining INTO ETERNITY in 2005, Block began his musical career singing for various bands in Vancouver, British Columbia, Canada. After two albums with INTO ETERNITY, Block joined ICED EARTH in 2011, with whom he recorded three LPs: "Dystopia" (2011),"Plagues Of Babylon" (2014) and "Incorruptible" (2017).