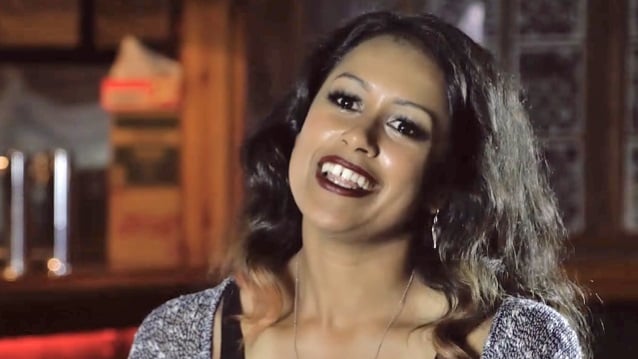 Former KITTIE Guitarist FALLON BOWMAN On Band's New Documentary: 'It Was Quite Shocking At Times'

In a new interview with music writer Joel Gausten, former KITTIE guitarist Fallon Bowman opens up about her 2001 split with the band, her subsequent musical activities and what she thinks of the just-released "Origins/Evolutions" documentary on KITTIE's career. An excerpt from the story appears below.

Recently, Bowman found herself re-connecting with her former KITTIE bandmates for the premiere of "Origins/Evolutions", the just-released documentary on the band's 20th anniversary. Although she participated in the project's crowdfunding efforts and was interviewed for the film, she was still very surprised by the finished product.

"I didn't follow the band after my involvement with them," she said. "I wanted nothing to do with hearing about them or anything. Getting to see what they had to go through after [former bassist] Talena [Atfield] left the band was interesting to me. There were so many things that I had no idea had happened. It was very informative to me as a former member. We kept in contact, but we never really had in-depth conversations about the things they had to deal with and the ups and downs post-'Oracle'. It was very interesting to me on that level, and it was quite shocking at times. I was like, 'Wow! That's crazy!' But I enjoyed it; I laughed my ass off at some parts, and there was the appropriate amount of emotion injected in there. It was very well done."

In addition to being on hand to celebrate the film's first official viewing, she joined the other original members of KITTIE — singer/guitarist Morgan Lander, drummer Mercedes Lander and bassist Tanya Candler — on stage for a live set at an after-party at the London Music Hall in Ontario.

"It was super surreal," she said. "We hadn't practiced together at all. [Laughs] For the most part, it was okay. There were times when I had to wake myself again; I was like, 'What the fuck am I doing right now? Yesterday, I was at work, and now I'm playing in front of thousands of people!' It was a very emotional experience at times as well, and it was different for me because Talena wasn't there. I played the majority of my time in the band with her. That made me a little sad, but overall it was just an incredible experience. I couldn't believe that people remembered certain things, like, 'Do you still burn a candle when you play?' I was like, 'What are you talking about?' Then, I realized, 'Oh, yeah. I used to do that, didn't I?' People have a longer memory than I do, I suppose!"

The event also gave the guitarist a chance the experience KITTIE's post-"Oracle" material live when a later incarnation of the band took to the stage.

"I was so fucking blown away listening to them play the songs that they play now as opposed to the ones we wrote as 13-year-olds," she said. "While those songs were good, the stuff that they're doing now is fucking spectacular. It got so much more complicated, but really in an admirable and mind-blowing way — and that's coming from a former member and somebody who used to be in the band. The band we were in 2000 and 2001 is not the band they are now. They're a well-oiled machine."

With her former band celebrating their 20th year, Bowman looks back at her KITTIE experience with respect for what they accomplished in the early days and admiration for her past bandmates' ability to persevere to the point where they are now one of the last bands standing from the late-'90s nu metal boom.

"I think KITTIE's longevity has quite a bit to do with people already deciding that we were — and they would continue to be — a band that would fall off the [industry] conveyer belt at the end," she said. "I won't speak for them, but as I know them, I think it would have been quite motivating for them to not want to be what everyone was thinking they would be — a one-hit wonder and a product of the times. That was a very strong feeling from the very beginning; we wanted to be in it for the long haul and continue to make music and grow."

The complete story is available at JoelGausten.com.