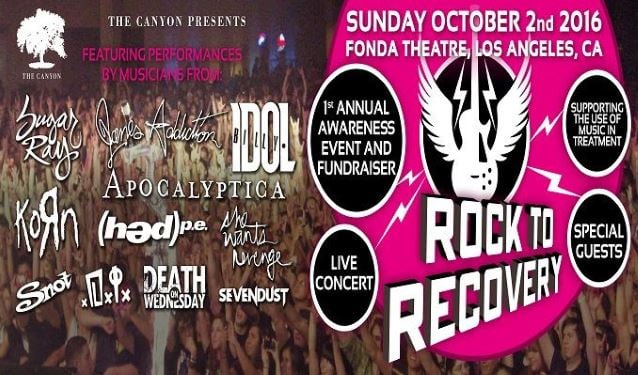 Former KORN Members To Perform At 'Rock To Recovery' Fundraiser

Rock To Recovery, a transformative program for those in treatment and recovery, will hold its first annual awareness event and fundraiser on Sunday, October 2 at 7 p.m., at the Fonda Theatre in Los Angeles, California. The first band will feature former KORN members David Silveria and Zac Baird, followed by an all-star jam featuring Mark McGrath (SUGAR RAY),Steve Stevens (BILLY IDOL),Franky Perez (APOCALYPTICA),Billy Morrison (BILLY IDOL),Chris Chaney (JANE'S ADDICTION) and Erik Eldenius (BILLY IDOL) and the band will be joined onstage by some very special guests.

Tickets can be purchased here.

Former KORN guitarist Wesley Geer founded Rock To Recovery on December 12, 2012 in an effort to bring a new type of music expression group into treatment centers. Program participants form a band, write a song together, and eventually record their work, offering a therapeutic release to patients recovering from alcoholism, drug addiction, depression, cancer treatments and more, by providing participants an opportunity to feel a part of something bigger. Rock To Recovery typically operates as an adjunct service to a treatment center's curriculum, and in three short years, the program has become an essential part of the weekly treatment curriculum for nearly sixty programs.

Rock To Recovery's non-profit entity donates its services to state-funded programs and indigent rehabs like Salvation Army and Clare Foundation, programs for at-risk youths including Turning Point and North County Lifeline, as well as Breath Of Heaven and the Wounded Warriors of the USAF. The musical nature of its songwriting sessions has proven to be a unique and clinically therapeutic tool, which effectively helps those suffering from PTSD, depression, suicidal ideation, anxiety, addiction and eating disorders.

To date, Rock To Recovery has been almost completely self-funded. Due to the program's success and subsequent demand, the organization endeavors to grow its reach through fundraising in order to bring the healing power of music to more people.

The event will be an excellent opportunity to celebrate Rock To Recovery's current work, learn more about the program and celebrate its successes, as well as support its goals for future action.