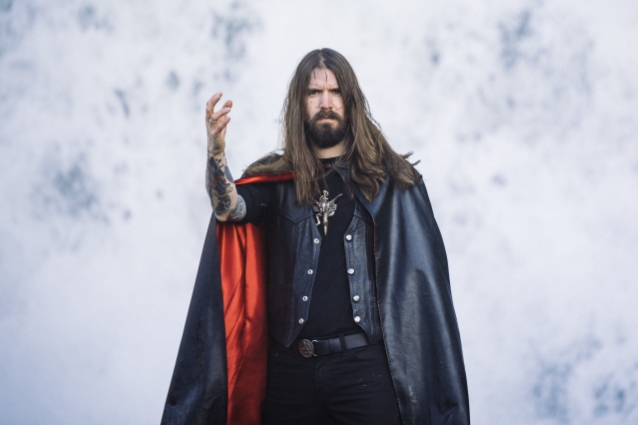 Former KVELERTAK frontman Erlend Hjelvik has launched a solo project called HJELVIK. The band has signed with Nuclear Blast Records and will release its debut album, "Welcome To Hel", later this year.

Jens Prüter, head of A&R at Nuclear Blast Europe, commented: "It's been 10 years since I first saw Erlend with KVELERTAK in my hometown Dortmund in Germany. Their debut album had only been out for a couple of months and was on heavy rotation on my turntable. I was blown away by the raw energy of his stage performance, and ten years later, it is an honour to start working with him on HJELVIK. He has not lost his high energy and brings his unique mix of black metal, hard rock and punk to a new level. Welcome to Nuclear Blast and onward to Hel!"

Hjelvik said: "Signing with Nuclear Blast is a dream come true for me. Since I was a teenager, I've been a fan of classic NB bands like IMMORTAL, DIMMU BORGIR, IN FLAMES and so on — so that makes me feel extra proud to call Nuclear Blast my new label home. I'm certain Nuclear Blast will do an awesome job bringing HJELVIK metal to the masses on my new album, 'Welcome To Hel', and many more to come."

Hjelvik describes his music as "blackened Viking heavy metal" with lyrics based on Norse mythology and history.

In announcing his departure, Erlend said in a statement: "The experience of building a successful band has been fun and rewarding but has also been equally intense and challenging. Over the years, this has taken its toll. As we've been developing personally and professionally, our individual goals, needs and motivations have changed, leading us in different directions. Though it is a heavy decision to leave a life I've been living and breathing for the last decade, I feel happy and excited to explore new possibilities for the future."