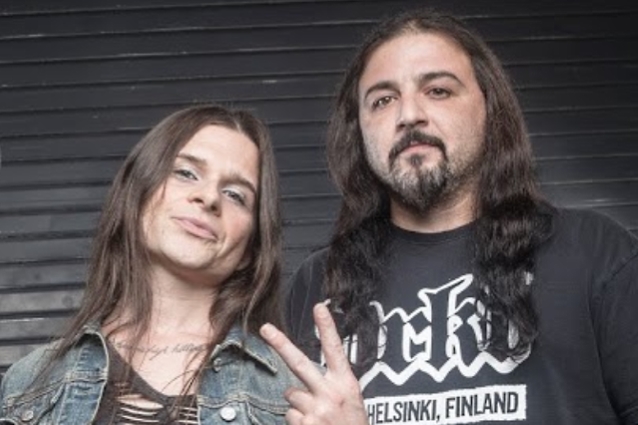 Former LIFE OF AGONY drummer Sal Abruscato has slammed the band's transgender lead singer, Mina Caputo, as "a really nasty person" who "is not who she says she is."

Asked in a new interview with Big Music Geek about the reasons for his December 2017 departure from LIFE OF AGONY, Sal said: "We had nothing in common anymore. I was 'ying' and they were 'yang'.

"I had written the music for and had arranged nine out of the ten songs on that last record [2017's 'A Place Where There's No More Pain'] hence why I got distracted from putting out another A PALE HORSE NAMED DEATH record... I was riding in a van and people had nothing in common anymore.

"I'm into hot rods, I work on my cars and I do electrical and plumbing work in my house. I work with my hands," he continued. "I'm basically a man's man. But I'm also an artist and a renaissance man, so I can do a lot of things. Basically, I was sitting by myself in the van in my own world. I also felt that the band was becoming something else and I wasn't really happy. I wasn't really happy with all the shenanigans going on around me. I felt like I was in a three-ring circus all of a sudden.

"I had a lot of bad things happen during the year where I was diagnosed officially with depression. They tried putting me on medication, but that medication was making me nuts, so I stopped taking that crap. At the same time, my youngest daughter is disabled. She went through 20 procedures that year alone and I had to leave on tour two different times. So I'm at the airport with my wife who was pregnant at the time and with my daughter at the hospital while she was getting surgery, so I was getting very depressed. In the end, they became very shallow as bandmates because they did not understand my situation and did not understand what it meant to be a father of a special-needs family. It's been going on since 2013 yet all they cared about was their superficial, shallow Twitter posts. I felt like it was becoming two different things. They weren't happy with me and I wasn't happy with them. Then they started getting really nasty with me towards the end via e-mail."

He added: "Mina Caputo is not who she says she is. She's actually a really nasty, nasty person. This preaching crap that she does is all a fake show, so in December [2017], I said, 'I had it. I'm out. I quit.' They already had their mind set on somebody else and I was, like, 'That's the thanks I get for literally writing ninety percent of your freaking record that made you have a successful comeback?' You can literally hear the A PALE HORSE NAMED DEATH-style guitar playing and writing that was in various songs on that record. Nonetheless, I was already talking to the other guys in the band and wanted to make another record. I think they had their hopes set on the fact that I was going to again be a fantastic ghostwriter on the next record for them, so it's two different worlds, dude. I like playing really heavy, dark and doomy stuff. ...I'm really not too fond of talking about them, to be honest, so I will just leave it at that."

Last October, Abruscato called Caputo a "piece of shit" on Facebook after the singer claimed in a Twitter exchange with a fan that the Sal was a "bigot" and a "homophobe." Mina also said that Abruscato was "kicked out" of LIFE OF AGONY twice and described him as an "envious," "spiteful" and "combative" person who "hates his own pathetic life."

"She went on social media and tried to destroy my career," Sal told Big Music Geek. "She made an unprovoked tweet to her thirty thousand followers calling me anti-transgender, a bigot and a homophobe, all of which is all bullshit. I've never said anything about her online. She totally tried to have the mob show up at my house with torches and chant, 'Burn the witch,' right? It was like the Salem witch trial.

"To be honest, I'm all for people doing whatever the fuck they want. I don't give a shit," he continued. "But people need to have the mutual respect to not shove their shit in other people's faces. Things were supposed to stay somewhat respectable and be a little conservative. What you do in the privacy of your own home is your own thing, but I don't need to have it force-fed down my throat every day.

"Basically, the band turned into a joke," Sal added. "It turned into a back-up band for this whole crazy movement she's been trying to do. And honestly, I think it's all fake. I think it's just like the people that get desperate to make it and get on the Ellen DeGeneres show and try to re-invent themselves. ...They're, like, 'Well, if I go this one way, I might get famous,' or something. After a while, I was, like, 'I'm not believing in any of this at all,' because I saw this really nasty person come out every now and then and it totally contradicted the preaching this person does."

Mina Caputo, formerly known as Keith Caputo, came out publicly as transgender in 2011. A few months later, she told Noisecreep: "I got a lot of grief for it, but it was nothing compared to the years of pain I went through not being open about the way I felt inside."

Abruscato told the press in 2012 that LIFE OF AGONY could no longer play live because "Keith wants to pursue his life and his lifestyle," but the band was eventually convinced by its agent to reunite again in 2014. Caputo told Rolling Stone in a 2017 interview that she felt hurt by Abruscato's comments and approached him about them. She claimed at the time time of the interview that there had been a misunderstanding. "Now he's, like, 'My fuckin' girlfriend's here!' when he sees me," she said. "All of the members of the band are so wonderful, holding doors open for me, carrying my bags, making sure I'm safe. They treat me like they treat their wives."

Abruscato was replaced in LIFE OF AGONY by Veronica Bellino, a New York native who has previously worked with DMC, LL Cool J, Carmine Appice and Jeff Beck.