Bassist David Ellefson (F5, ex-MEGADETH) and drummer Ken Mary (ALICE COOPER, HOUSE OF LORDS) will peform with Northern Lights Orchestra in Phoenix, Arizona on April 17 at the Orpheum Theatre. The show will be filmed for an upcoming DVD.

According to the project's bio, Northern Lights Orchestra highlights majestic, orchestrated rock music featuring soaring vocals, incredible guitar solos worthy of true "guitar hero" status, and pounding rhythms sure to impress and invigorate the baby boomer generation that grew up on what is today classic rock!

Combined with the talents of executive producer and longtime record mogul Russ Regan, (responsible for over 800 million record sales with such artists as Neil Diamond, Elton John, and Barry White as well as soundtracks such as "Flashdance" and "Jesus Christ Superstar"), NLO is slated to become a seasonal live performance and recording entity that provides the very best in entertainment!

Vocalists and musicians appearing on NLO have been responsible for the sale of over 200 million albums worldwide and include members and former members of household names such as the BEACH BOYS, SLY AND THE FAMILY STONE, ALICE COOPER, SURVIVOR, STEELY DAN, FIREHOUSE, MEGADETH, SISTER SLEDGE, QUIET RIOT, VANILLA FUDGE, WINGER, BOB CARLISLE, GUNS N' ROSES, GRAND FUNK RAILROAD, KISS, HOUSE OF LORDS, and WHITESNAKE, just to name a few.

Live performances will highlight a spectacular light and video presentation, theatrical movements, as well as incredible musicianship all assembled to tell the story of the birth of Jesus Christ over two thousand years ago. 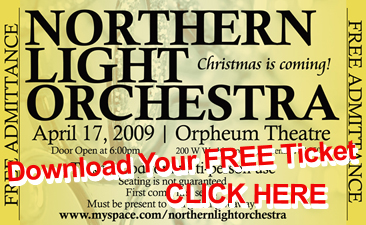