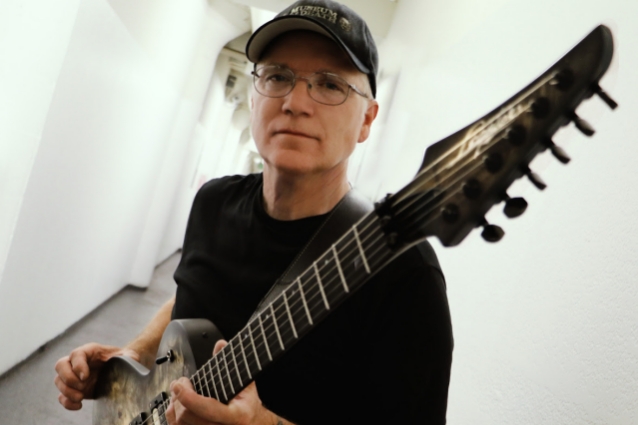 Former MEGADETH guitarist Chris Poland is working on a memoir with the help of Thom Hazaert, who recently co-authored MEGADETH bassist David Ellefson's "More Life With Deth". The book is titled "Liar: Truth, Highs, And Consequences", and will tentatively be released sometime in 2020, in partnership with Combat Records and Ellefson Books. It will also feature contributions from many others, including Ellefson, Stu Samuelson, Randy Burns, Mark Tremonti, John 5, and many of the other key friends and family that have been part of Chris's musical journey.

Hazaert commented: "Yes, I am writing a new memoir with my friend, legendary MEGADETH guitarist Chris Poland, and it is every bit as amazing as you'd think it would be. Also, David Ellefson and I are launching Ellefson Books, which will be the co-publisher of this incredible telling of Chris's journey."

The book's cover by Melody Myers from Designed By Melody, featuring an iconic photo courtesy of Neil Zlozower, can be seen below.

For the past couple of decades, Poland's main musical focus has been the fusion band OHM:, which has released three full-length studio albums to date.

In a 2018 interview with the As The Story Grows podcast, Poland stated about nearly rejoining MEGADETH after the "So Far, So Good... So What?" cycle, and his belief that declining the band's offer to rejoin while renegotiating royalty rates led to his removal from the roster of Capitol, MEGADETH's then-label: "When I got my '[Return To] Metalopolis' deal with Enigma, it was originally on Capitol Records, but Dave [Mustaine, MEGADETH mainman] — he kept asking me to join MEGADETH again. I actually was 99 percent going to join MEGADETH, and then Janie [Hoffman], who was managing me, for two days, she told me, 'If you join that band, you're going to die.' I'm totally sober [at that point], and I'm not 100 percent sure that they are. She said, 'If they're not sober, and you join the band, you're not going to make it.' The first time I met her, I was coming off the bus going into the Santa Monica Civic Center to do a gig. She looked at Andy Somers, our agent, and said, 'He's going to be dead in a month.' And something happened. All of a sudden, I just hit bottom. After the firing, which was basically, I was late for a MEGADETH meeting — I couldn't get a ride. I didn't have a car. I couldn't get there. I finally get there. Dave's gone, so I can't get my $200 per diem, so I had no money. I call him up on the phone, I said, 'Dave, I couldn't get a ride. I'm here now.' He goes, 'Well, I don't care. You're not getting paid.' I said, 'You know what, man? Why don't you fire me?' I said, 'Oh, wait, I know why you won't fire me — because I don't think there's anybody that would put up with how you treat people.' We had a big blow-out, and two days later, I get a letter at my girlfriend's house saying, 'Your services are no longer needed, and have a good life.' I was like, 'Whoa!' That's when I hit bottom, about a month after that. I had no money; I was totally in a bad place; I finally just called home, and the rest is history. [Years later,] Janie finally said, 'Hey, man, you just got yourself a [record] deal. You have a deal to do what you love doing. Why are you going to do that?' I said, 'You know what? You're right.' I'm not saying she talked me out of it, but she was the voice of reason. I thought, 'There's a chance it could happen, that I could start using again.'

"At the [negotiating] table, they had told me that Marty Friedman was on the block for the position, and I thought, 'You know what? That makes it easy for me, because Marty's a freaking animal. I said, 'Hey, why don't you guys use Marty? I have this deal; I've worked very hard for it; and it was on Capitol.' They were upset — and granted, I understand, because they did all this work with our attorneys, and I'm sure that they felt like I did that just to get that money, but that's not what it was about. It was about, 'Let's make everything level here.' I didn't need money for drugs anymore; I just wanted what me and Gar [Samuelson] were due. We kind of got, like, tossed to the side there. I think they thought Gar was going to die. I had my deal with Capitol, and the next thing I know, I don't have a deal with Capitol. All of a sudden, I have a deal on Enigma now. It's a mystery to me to this day. I'm not going to say it out loud, but I have a feeling it had something to do with what happened at that table when Marty got the gig in MEGADETH. Now I'm on Enigma, a subsidiary of Capitol. To make me feel better, they gave me, like, an extra $50,000. I was like, 'Okay.'"

Regarding additional legal issues surrounding the 2004 reissue of "Rust In Peace", which contained demos on which Poland performed, Chris said: "When I did 'The System Has Failed', he was working on adding the demos to a re-release of 'Rust In Peace'. And I wasn't going to get paid, but I didn't realize that until it came out. I was like, 'Wait a minute — I'm not getting paid for this.' And I tried to call Dave at least a dozen times, and I never heard back from him. Then I called Dave's manager a dozen times, and he wouldn't get back to me. The last time I called him, I said, 'Hey, man. If you don't call me back, I'm going to call [my lawyer], and we're going to have to get into it.' [The manager] calls me back and totally insults me, saying, 'You played a couple solos. So what?' And I'm like, 'What do you mean, 'So what?'' 'Well, Dave thought that you would do it for the fans.' I said, 'Okay. Is everybody else that played on that demo doing it for the fans? Are they getting paid?' He said, 'Chris, that's not the point.' I said, 'Listen, man, we have to do something here. I'm not just going to walk away. I love the fans, but I'm just not going to do it. If everybody else is getting a performance royalty for this, I want one.' I want everybody to know that it wasn't a nuisance suit, it wasn't anything like that. I made every attempt to work it out, and they just ignored me."

Poland made a guest appearance on Ellefson's debut solo album, "Sleeping Giants", which was released in July via Combat Records. The song "Hammer (Comes Down)" marked Ellefson and Poland's first commercially released collaboration since "Peace Sells.. But Who's Buying?".

Earlier in the year, Poland signed to Ellefson's relaunched Combat Records label. Combat released a deluxe reissue of Chris's 1990 solo debut, "Return To Metalopolis", in November. Originally released on Enigma Records in 1990, "Metalopolis" was Poland's return to the stage after his 1987 departure from MEGADETH.

We have alluded to it in recent weeks, and now it's time to spill some beans. Yes, I am writing a memoir, with my good...