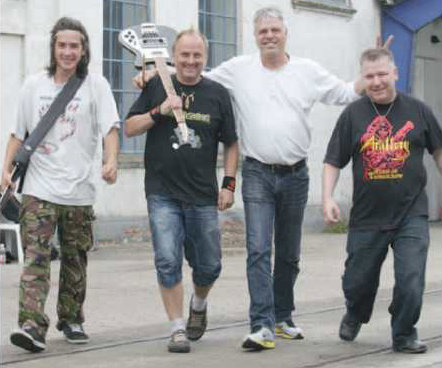 Due to "physical limitations," former MERCYFUL FATE drummer Kim Ruzz (a.k.a. Kim Thyge Jensen) has "decided to stop" his involvement in the Danish heavy metal band called METALRUZZ. According to METALRUZZ singer Krudy Bøhm, "The band has been looking for a replacement after the band's guitarist left the group, but now it is over. METALRUZZ thank you for all you inquiries from prying metal fans from around the world."

You can read Krudy's statement at this location.

After MERCYFUL FATE was presented with the "honor award" at the Danish Metal Awards 2006, Ruzz released a statement to BLABBERMOUTH.NET in which he said, "Yes, I became a postman for a short period, but not in the U.S. as many people think. After that, I took an education in the construction business and worked as foreman and calculator.

"Many stories have been told that [Michael] Denner [MERCYFUL FATE guitarist] and I couldn't stand the sight of each other, [but] it could not be more wrong. We were, and still are, best friends.

"As you know, we won a Danish music award [in November 2006]. We [attended the event] together, the four of us [Michael Denner (guitar),Hank Shermann (guitar),Timi 'Grabber' Hansen (bass) and Kim Ruzz (drums)], [as] King [Diamond] couldn't make it. And the magic was reborn."

MERCYFUL FATE will always be remembered for their unquestionable mark on the history of metal, with their new innovative sound, complex arrangements, memorable melody, and their influence on bands that later took the genre to new heights, according to Wikipedia.

Lars Ulrich of METALLICA (a fellow Dane) played drums on a new version of "Return of the Vampire" on the "In the Shadows" album, which came out in 1993.