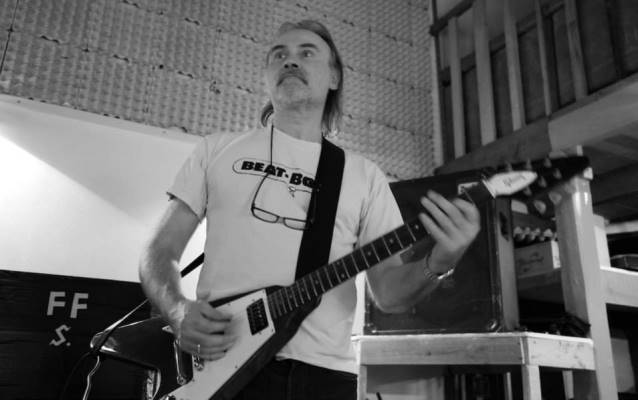 Legendary Danish heavy metal guitarist Michael Denner (DENNERS TRICKBAG, MERCYFUL FATE, KING DIAMOND, FORCE OF EVIL) was interviewed on the March 7 edition of "Heady Metal With Jeff Olson", the Internet radio show hosted by original TROUBLE drummer Jeff "Oly" Olson (currently in THE SKULL). You can listen to the chat in its entirety below.

"Heady Metal With Jeff Olson" airs exclusively on www.inthepitradio.com on the first Friday of every month from 7 p.m. until 9 p.m. EST.The show features interviews with musicians from various metal subgenres, celebrities, interesting people from all walks of life, comedic segments, hot topics and music news.

DENNERS TRICKBAG's video for the song "Don't You Let Me Down" can be seen below. The song comes off the band's debut album, which was released in September 2013 on CD, LP and as a digital download.

Said Denner: "I got the idea [to form DENNERS TRICKBAG] one evening when I was sitting at home philosophizing about whom I would rather play with if I had a free choice within the heavy metal world I've found myself in for so many years. I called these four guys up, and they all said yes.... The condition was that the music had to be tough progressive '70s heavy with a lot of guitar solos – and everyone was totally involved in the idea.

"If bands like MOUNTAIN, THREE MEN ARMY, MONTROSE, TEMPEST, BOXER, JERICHO and CAPTAIN BEYOND are among your favorites, then this band will be right up your alley!"

"Don't You Let Me Down" video: