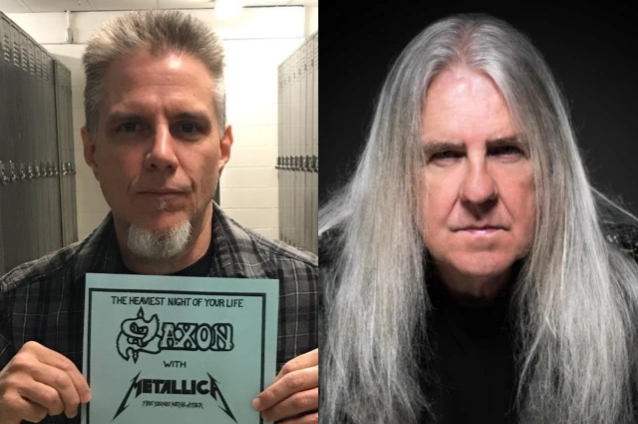 During a new appearance on "The Chuck Shute Podcast", Byford recounted a funny incident that allegedly happened when METALLICA was the support act for SAXON at the Whisky A Go Go in West Hollywood, California in March 1982. "I think we were out having dinner or something before the gig or doing something," he recalled. "And METALLICA was setting up on stage. And I wasn't there. I was there later for their show, but I wasn't there [when they were setting up]. And I had a huge electric fan there in front of me, and I think METALLICA asked if they could use it, and our tour manager said 'No.' So they didn't use it. They didn't talk to us for a long, long time because of that. [Laughs]"

He continued: "I wrote a book, an autobiography, a few years ago, and in the book, I said, 'Look, if you wanna use the fan anytime in the future, it's no problem. You can use it guys.' And they got in touch with me after that. They must have realized that it was a bit stupid. And we got on [and became] big friends after that. So, that was pretty cool."

A day after BLABBERMOUTH.NET published a story based on Byford's comments, McGovney — who was METALLICA's bassist at the time of the Whisky show — took to his Twitter to share the article and he included the following message: "Wow. What a story. Total fiction."

Seemingly backing up Ron's claim is the fact that METALLICA drummer Lars Ulrich didn't mention anything about wanting to borrow Byford's electric fan when he wrote about his band's experience opening for SAXON at the Whisky in an Instagram post back in March 2019. At the time, he said: "On March 27th in ’82, we played our 2nd & 3rd shows at the legendary Whisky a Go Go in LA, supporting SAXON. For us at the time, this was like winning the lottery. Not only was this our first Hollywood gig, but in the early 80s, SAXON were one of the biggest, most exciting & influential hard rock bands in the UK & Europe. I had actually seen them six months earlier on their Denim & Leather tour in Brighton, where I even managed to sneak backstage. Haha…

"Back then, our set consisted mostly of cover songs & most of those were DIAMOND HEAD songs. Funny story… after the 1st set, this guy on SAXON's crew comes into our dressing room & asks us, in a very matter-of-fact tone, whether we had ever heard of a band from England called DIAMOND HEAD. I snapped back at him, 'Of course we have, we just played a bunch of their songs!!' It turned out that apart from being SAXON's monitor engineer, he was also DIAMOND HEAD's monitor engineer. His name was Paul Owen & he eventually became METALLICA's monitor engineer, playing more than 1,300 shows over 22 years with us. Take that with ya.

"All in all, an incredible night for 'TALLICA & a mind fuck for us to see our logo occupying the same space on a flyer as the mighty SAXON & the celebrated Whisky a Go Go."

McGovney was a member of METALLICA during 1982 and appeared on the band's early demos. Tension between McGovney and then-METALLICA guitarist Dave Mustaine led to the bassist quitting the band and being replaced by Cliff Burton. He later told "Talk Is Jericho" that his exit from METALLICA wasn't upsetting to him because he was less into the band's thrash style, plus he was interested in being a motorcycle mechanic.

In December 2011, Byford joined METALLICA on stage for the first of four intimate shows at the 1,200-capacity Fillmore in San Francisco as part of the week-long celebration of its 30th anniversary as a band for fan club members only. The iconic metal vocalist performed the SAXON classic "Motorcycle Man" with METALLICA.

It wasn't the first time Biff and METALLICA had surprised their fans with a live rendition of the song: in 2009, Byford joined the San Francisco heavy metal giants in Paris, at Palais Omnisport de Bercy.

Wow. What a story. Total fiction. What do you think @DAVIDMARRS_ ?