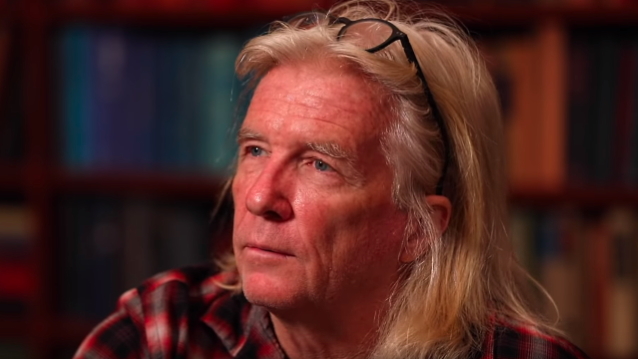 Canadian producer Bob Rock, who has been responsible for some of the biggest rock and metal albums of the last 30 years, including all of METALLICA's studio output during the 1990s and early 2000s, says that the production on the "…And Justice For All" album "didn't make sense" to him when he first heard it.

In a recent interview with Gibson TV (see below),Rock said that he first witnessed a METALLICA live performance in 1989 and that he was surprised by what he heard.

"THE CULT warmed up for METALLICA on the 'Justice' tour, and I bought the 'Justice' album," Bob recalled. "I liked the song that I saw on MTV, 'One'… So I listened to the record, and there was just no bottom end, and I'm going, 'Okay. This is kind of interesting.' … Anyway, so I went to see THE CULT and I stayed for METALLICA. And what I saw in METALLICA was not the sound of 'Justice'; I heard this big band that had weight and size. The record didn't make sense to me. And I know it's a standard for a lot of people, but I'm just being honest here."

A short time later, Rock, who previously recorded BON JOVI's "Slippery When Wet", MÖTLEY CRÜE's "Dr. Feelgood" and THE CULT's "Sonic Temple" albums, among others, got a call from his manager letting him know that the members of METALLICA loved "Dr. Feelgood" and wanted him to mix their next album. Rock replied that he wasn't interested in mixing the LP, but that he would produce it.

"They flew up to Vancouver and we had a meeting," Bob told Gibson TV. "They brought a cassette deck. And they played it. And I'm just listening to the demos. I heard 'Sad But True' and I went, 'Phew! Wow!' It was all there — the tempos. In my head, I was just going, 'I can do this. I can make a great record.'"

As captured in the "A Year And A Half In The Life Of Metallica" documentary, the making of the Black Album was a tense, contentious affair, with Rock altering METALLICA's working schedule and routine so much that the members initially swore never to work with him again.

"The great thing about METALLICA, when they make a decision, they commit fully to it," Bob told Gibson TV. "So even though a lot of things that I brought to them, just what I brought to them in terms of the changes that were made, they embraced, and they do it full-on."

"Lars [Ulrich, drums] and James [Hetfield, guitar/vocls] are definitely the butting-heads alpha males of METALLICA," he continued. "I think it's always that thing, like great bands — [Steven] Tyler and [Joe] Perry, [Mick] Jagger and [Keith] Richards, Paul [McCartney] and John [Lennon] — there's always that thing. So I think Lars had a vision, James had a vision, and that's what the 'Black Album' is."

Rock, 65, told Reuters in 2006 that he felt "20 years younger" after his split with METALLICA, whose last studio effort, "Hardwired… To Self-Destruct", was helmed by Greg Fidelman.