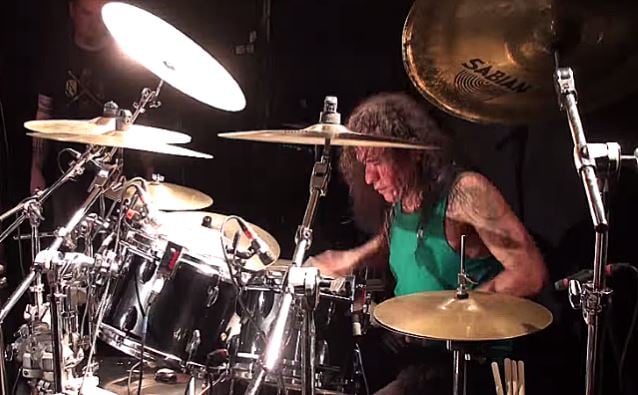 Former MORBID ANGEL and current TERRORIZER drummer Pedro "Pete" Sandoval, who now lives his life as a born-again Christian, says that his personal beliefs will not affect TERRORIZER's music or lyrical content, explaining that his faith has given him a positive outlook on life.

Sandoval — who was forced to leave MORBID ANGEL in 2010 after undergoing surgery for a prolapsed disc — told Colombia's Cronicas Estigias: "My beliefs [are not] gonna affect TERRORIZER material, because I believe in my personal beliefs and I'm not associating any of my beliefs with whatever message TERRORIZER brings. And the message that TERRORIZER has will not change; it will be the same: about world corruption, this world system… everything that's happening today in the world… [everything that you read about and see on the] news. That's the corruption of the world, that's the way of the world. And TERRORIZER's gonna continue announcing, talking about the reality, the truth of things happening in the world."

He continued: "TERRORIZER is not gonna become Christian. I'm not gonna start bringing in stories from the Bible.

"TERRORIZER is always gonna be TERRORIZER: extreme grindcore, political lyrics… My beliefs just bring me a positive outlook on life. That's my belief. It gives me hope. For me, it's a great thing that's happened. I was in the dark, and suddenly I saw the light. [So it's] something wonderful [that happened]… So that's all positive, and positive means life, and life means we wanna continue doing… I wanna continue playing."

Sandoval added: "I'm back, and I feel… in fact, I feel a lot better in my performance and, in the way, health-wise, than I felt ten years ago with MORBID ANGEL. I was having more problems back then with my back than now, and I didn't any outlook on life back then; I was just following whatever everybody was saying it is, you know what I mean?! But now I've got this positive belief… and it just makes me alive again. And I [wanna] keep doing what I'm doing, and I wanna, like… wow, I wanna be better, man. I still wanna get better."

MORBID ANGEL bassist/vocalist David Vincent told Invisible Oranges in a December 2013 interview that "Pete has found Jesus," which meant that Sandoval and MORBID ANGEL were no longer "compatible."

Sandoval is continuing to celebrate the 25th anniversary of TERRORIZER's classic album "World Downfall" by performing the LP in its entirety. He is being joined at the gigs by Lee Harrison (MONSTROSITY) and Sam Molina.

TERRORIZER's latest CD, "Hordes Of Zombies", was released on February 28, 2012 via the French label Season Of Mist.