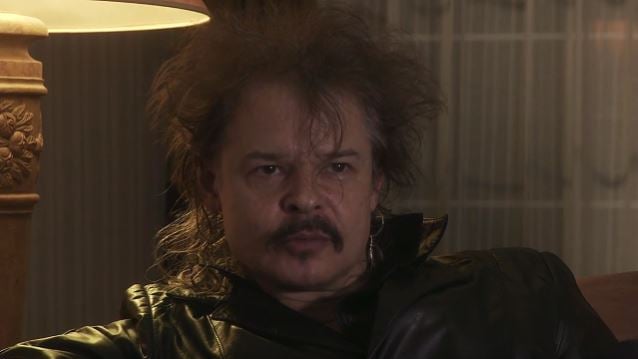 Taylor's former MOTÖRHEAD bandmate "Fast" Eddie Clarke posted the following tribute to his colleague: "My dear friend and brother passed away last night. He had been ill for sometime but that does not make it any easier when the time finally comes.

"I have known Phil since he was 21 and he was one hell of a character. Fortunately, we made some fantastic music together and I have many many fond memories of our time together.

Taylor contributed to MOTÖRHEAD's 1992 album "March Or Die" but departed the band during the recording process. The album was completed by drummers Tommy Aldridge and current sticksman Mikkey Dee.

Said Ozzy Osbourne in a statement: "Just heard about Phil 'Philthy Animal' Taylor's passing. It's a terrible terrible loss. He was a great friend — great drummer — a great guy and he will be dearly missed. Today is a very sad day for me. Rest in peace — and he still owes me 500 bucks from that time in Vegas."

In a 1983 interview with Artist magazine, Taylor stated about his drumming approach in MOTÖRHEAD: "Well, once [MOTÖRHEAD bassist/vocalist] Lemmy starts playing, he's sort of out there on his own, in a way. It's something that came naturally; but when Robbo [Brian Robertson, guitar] joined the band, we started working it out a bit more. When Eddie was with the band, I played more with the guitar than I did with Lemmy, because he's not really a bass player. Lemmy always plays so fast that it's always been down to the guitarist and me to keep the rhythm and melody going. Lemmy is just non-stop playing all the time, so for the highs and lows of the numbers, the ups and downs, light and shade — whatever you want to call it — it's basically down to Robbo and myself. I'd never played much before, so it's probably a lot more difficult for Robbo than for me. He'd always played in bands that had a proper bass player, so to speak."

Clarke and Taylor rejoined their former bandmate Ian "Lemmy" Kilmister on stage on November 6, 2014 at National Indoor Arena in Birmingham, England before Clarke, Lemmy and current MOTÖRHEAD drummer Mikkey Dee ripped through a blazing rendition of the MOTÖRHEAD classic "Ace Of Spades".

Asked in a 2011 interview with Guitar International if he had any plans to ever reunite with Taylor and Clarke, Lemmy said: "No, because these two guys with me now have been with me longer than the original two. They played 'Ace Of Spades' more often than those two. They played 'Overkill' more often than those two. Why should I put Phil [Campbell] and Mikkey on hold to go off with guys who probably can't play them as well? They've been out of practice. It's ridiculous to think of it. Then I would be a nostalgia act. I'm all for the now and the future."

Regarding whether he still talks with Phil and Fast Eddie, Lemmy told Guitar International: "Now and then. I like Phil, he was my best mate. Eddie was kind of a friend except he was always complaining about something. It got kinda tedious. Last time he left, we laid low. Before, one of us would go off and bring him back. It was a shame he shouldn't have done that, we had a lot going for us back then. He should have stuck though it. It was the Wendy O. Williams thing and I couldn't understand that (reference: recording 'Stand By Your Man', a cover version of the Tammy Wynette with Wendy O. Williams). He just gave up on it because Wendy wasn't immediately perfect on it, she just needed to go through it a few times and he left the band over it. I couldn't fucking believe it. I think he was expecting to be talked back in. Phil came in the room and said, 'Eddie's left again.' I said, 'Whose turn is it to go talk to him?' [Laughing]. I said, 'Fuck it, I'm not doing it.' That's the way it went. Wrong decision on his part."

My dear friend and brother passed away last night. He had been ill for sometime but that does not make it any easier...

Great to have Philthy Animal Taylor and Fast Eddie Clarke join us in Birmingham What a way to start the tour!!!!!!!!! pic.twitter.com/c5hSRGjZVV