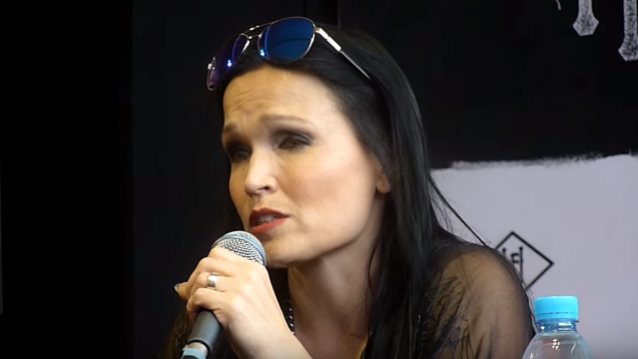 Former NIGHTWISH singer Tarja Turunen took part in a press conference at this year's Hellfest on June 19 in Clisson, France. You can now watch the question-and-answer session below.

Speaking about how she has evolved as a solo artist following her 2005 split with NIGHTWISH, Tarja said: "The current situation in my life as an artist has brought me to a place where I really, really, really feel very comfortable.

"Many things have changed. I've learned enormously in these last years. I mean, being a solo artist is very different than being a member of a band. It's absolutely different. The whole situation is very different — situations where you can't really compare, it's so very different. But I found happiness. I found also freedom, and, to be honest, to be able to write songs and to perform your songs for your audience is a dream come true for me. And so I have to say that I'm very, very, very grateful for this opportunity to be an artist and have a career today.

"We are living hard times in music business in general, so it's not easy for anybody, I think, but I really, really… I have to also remember that every day."

Tarja's forthcoming heavy rock album, "The Shadow Self", will be issued on August 5 via earMUSIC.

While waiting for the release of "The Shadow Self", Tarja and earMUSIC have released the new album's prequel, "The Brightest Void". With over 50 minutes of new music, the extra album was released on June 3 via earMUSIC as a CD digipak, LP+download code and as a digital download.