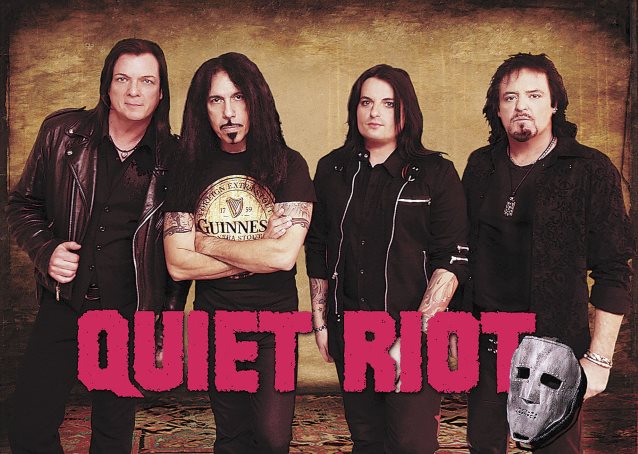 Former QUIET RIOT singer Mark Huff has described the band's music as "shit" and has slammed the group's leader, Frankie Banali, as someone who "thinks he has talent."

Huff's comments came in response to an interview Banali gave to The Morning Call in which the drummer made disparaging remarks about the many singers that he hired after Kevin DuBrow's death in 2007 and prior to the addition of "American Idol" finalist James Durbin earlier this year.

Speaking about Durbin's contributions to QUIET RIOT, Banali said: "What he has brought to the live material is his own thumb print. So it does sound like QUIET RIOT, but at the same time he brings something of himself. Which I welcome, because I tried the karaoke, Kevin-DuBrow-club lead singers and failed miserably doing that. So I decided to step away from that, and either people will like it and accept it on his own merits or they won't."

After Sleaze Roxx posted a story highlighting Banali's quote, Hufftook to Facebook to fire back with a few jabs of his own. He wrote: "Lol,karaoke singers……,Frankie still thinks he is someone with talent.,or thinks he had some. He will never get any attention pretending to be nice. I havent played drums in years and i can still play better than his worthless karaoke hating ass! Hell,i can sing and play drums…if i could remember the lyrics to One piece of shit QR song from one album,which i never purchased or borrowed"

Huff, who was officially fired from QUIET RIOT in January 2012, previously accused his former bandmates of "letting him go" without having had the "balls" to "tell it to [his] face." He claimed at the time of his dismissal to have been undergoing "brain surgery" and revealed that he learned of his exit in a social media post. This was followed by a statement from Banali, who insisted that "Huff's medical condition had nothing to do with the decision that was made" to kick him out of the band.

Huff, who succeeded DuBrow, stated in a September 2010 interview, shortly after he joined QUIET RIOT, "I am honored and very excited to be QUIET RIOT's new singer. I am also humbled and feel a bit of pressure. Who wouldn't feel pressure? Kevin DuBrow was a one-of-a-kind songwriter, musician and a consummate performer. He had an incredible vocal range; I have mass respect for Kevin."

Regarding what fans were supposed to expect from his live appearances with QUIET RIOT, Huff said at the time, "I don't think trying to duplicate Kevin's every sound or movement is what honors Kevin DuBrow or QUIET RIOT. It's important for me to stay true to the songs as they were written, as the fans remember them, and to bring the live show to full strength. I am not here to replace Kevin DuBrow."

He continued, "Frankie summed it up best when he said, 'Kevin DuBrow was one of a kind and cannot be replaced.' I am here to help QUIET RIOT continue to keep the music alive in the most flattering way possible."