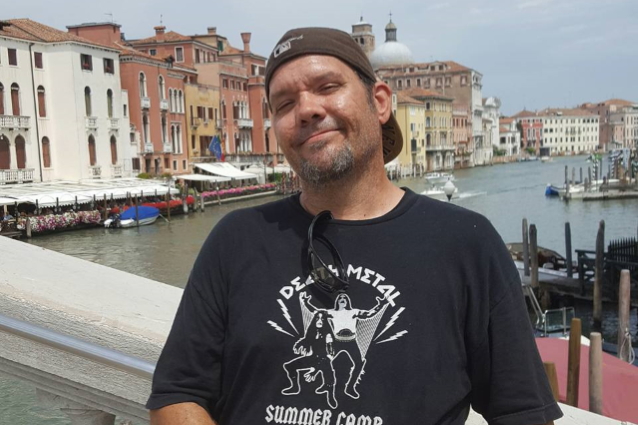 Former SACRED REICH guitarist Jason Rainey died Monday night (March 16) of an apparent heart attack. His death was confirmed by his wife Renee Novak, who wrote on Facebook: "My husband Jason Rainey passed away a hour ago. Most likely a heat [sic] attack. They worked on him for a half hour but they couldn't save him."

A short time later, SACRED REICH issued a statement on Rainey's passing. The group wrote: "It is with deep sadness and broken hearts that we must announce that our friend, guitarist and founding member of SACRED REICH, Jason Rainey has passed away.

"Jason started the band after only playing guitar for six months. With sheer determination and will, he lead us through the early years of the band. He worked tirelessly. SACRED REICH was his life.

"In recent years he faced some serious medical issues. He ultimately succembed to a heart attack on Monday, March 16. He was 53 years old.

"Jason, we wish you peace and love.

SACRED REICH parted ways with Rainey in February 2019 and replaced him with Joey Radziwill. Frontman Phil Rind later told Sonic Perspectives about the guitarist's exit from the group: "Unfortunately, Jason just physically… There's some stuff going on with him. He just wasn't going to be able to do it. We tried everything we could. We all tried. It just became apparent he wasn't going to be able to be up to it and come through for us. It's really sad. It's a real heartbreaking thing. Jason started the band. He and I did so much together, and I'm probably closer to him than anybody else on the whole planet. When it became apparent, I cried for two days straight. It was heartbreaking. We had to do what we needed to do. The band needs to keep going. We were really lucky to have Joey. It was very last minute, right up until the end, right when we went into the studio we were pulling for Jason: 'Come on!' It was the first day in the studio it became apparent it wasn't going to work."

As of last October, Rainey still apparently harbored ill will toward his former bandmates, writing on Facebook: "I keep getting freind requests from people who must think im still in SACRED REICH, i am not, i hate them and am trying to get along with my life after being robbed by them, so im sorry but im not interested in talking about them answering questions about them or even thinking about them sorry but i just dont care about those a holes any more theyve taken enough from me and i dont want to waste any more time on them sorry sad but true"

My husband Jason Rainey passed away a hour ago. Most likely a heat attack. They worked on him for a half hour but they couldn’t save him.

It is with deep sadness and broken hearts that we must announce that our friend, guitarist and founding member of Sacred...