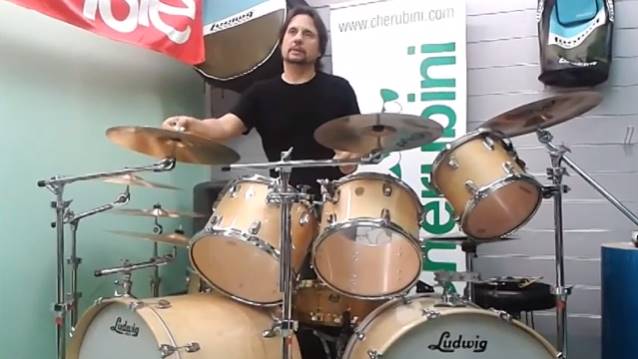 Journey Of A Frontman recently conducted an interview with former SLAYER and current PHILM drummer Dave Lombardo. A couple of excerpts from the chat follow below.

Dave Lombardo: I think I did my first clinic back in '95; it was the Modern Drummer drum festival. I did another one in 2000, then I started doing more as time went on. And now there seems to be a demand for them. What I took from them was that everyone doesn't learn drumming the same way. I was self-taught. There's a lot of kids and drummers out there that go to school for music. So I had to find a way to communicate with the fans and people that were interested in my drumming. The format that I use is more like a one-on-one with Dave Lombardo. I go up there and I'll play along to some music and then I'll go off and do a drum solo. Then I pick up the microphone and start chatting about my setup, what I use, the pedals I use, everything. And then we start this kind of question-answer presentation. The kids love it, they have a conversation with one of their favorite drummers. I'm pretty easy to get along with and the kids notice that right away. They pick up on that personality and we have a really good conversation. Pretty much what others do is they bring the teacher/student format where they're talking about all this stuff that I think fans get enough of in their everyday life when they go out to school and learn music. I'm focusing on giving them a different approach to drumming, not the same format. So what I've learned with other drummers and their clinics is that they're the teacher, you're the student, and I kind of drop that barrier. I don't like that.

Journey Of A Frontman: So I understand you have a project with Disney in the works.

Dave Lombardo: I'm scoring music for an eleven-minute pilot. It was challenging because we're creating music that is only one and a half bars, that's it. And these are very short pieces. Though challenging, it was actually a lot of fun. And I think working with Mike Patton in FANTÔMAS and creating that style of music has helped me understand the approach to composing for cartoons, sitcoms, or movies.

Journey Of A Frontman: What's the feeling like in the studio working on the Disney project as opposed to being with a band and recording an album?

Dave Lombardo: Well, obviously with a band you have songs on an album that extend over three minutes, three and a half, four, five minutes long. So it takes a lot of concentration to make sure that the songs are laid down in the studio and recorded tight and on point. With composing music for a cartoon, we're watching the cartoon and of course they give us key points, little guidelines. They'll say, "Right now, the character is thinking about something. So we have to have a clock ticking, some kind of curious sound or a curious note or tones that kind of create the feeling of thinking or thought." So we have to search into our catalog of sounds and samples. And then we pull from that. It's like, "Okay, this sounds like what they're asking us to do." Then we'll apply it and we'll create it. Usually like I said, it's a bar and a half to two bars, three bars. And then that's it. You have to time it correctly where it starts. "Okay, we're gonna play this for three bars. It starts at this point and ends here." We'll create the piece and then the song will end on an upbeat, it's kinda weird. But anyways, it's a whole different process. But I definitely enjoy it.

Journey Of A Frontman: Speaking of new projects, does PHILM feel like a rejuvenation for you?

Dave Lombardo: Yes. It felt like a rejuvenation when I first got the band together back in 2010. When you're in a band for over twenty years, it becomes a job. There's hardly any communication with the band members. You rehearse with the band a couple days before the tour, then they fly back and that's it. You see 'em on stage, but there's really not much to it. With PHILM, we're friends, we hang out, we have lunch together. Let's say if we have a whole day of rehearsing and writing, we basically hang out. We're friends. It's definitely different from what I've experienced before.

Read the entire interview at Journey Of A Frontman.