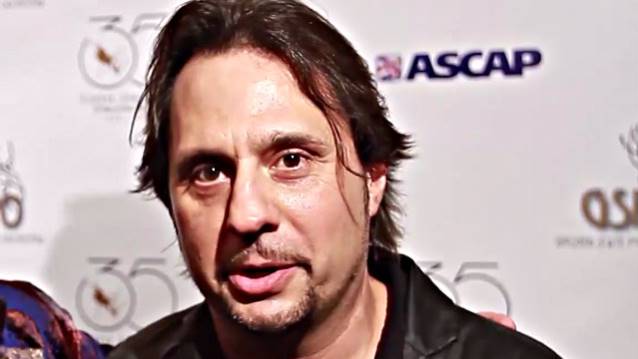 Axes Leftovers recently conducted an interview with former SLAYER drummer Dave Lombardo. A couple of excerpts from the chat follow below.

Axes Leftovers: I would have to say, for a drummer, I believe you are the most diverse. With all the different projects you have been a part of, which are you most proud of and which have been the most influential to you personally?

Lombardo: I am proud of all the projects I have worked on. I have learned something from every one of them. My work with Mike Patton and John Zorn was and continues to be highly influential in my growth as a musician. My recent experiences with recording the Season 7 soundtrack of "Californication" and performing a score by Christopher Young with a 75-piece orchestra were definitely unexpected, incredible moments. Also, I recently produced my first album for my band PHILM. I am extremely proud of making a step toward another career goal in music production. Oh... and I am also proud to have played the first and last notes with SLAYER.

Axes Leftovers: Since your departure from SLAYER, you've been focusing on your band PHILM. What are your future plans with that band?

Lombardo: We have our second album completed and ready for release. So, I'd like to get that out there and get back on the road. We haven't toured nearly enough, so I see a lot of that in our future.

Axes Leftovers: PHILM has a very different sound than what some are used to hearing. How would you describe that band to someone who has not hear it?

Lombardo: Heavy. We have grown so much since our first album..... it's hard to describe. Heavy, powerful and challenging. For Dave Lombardo fans, our show is like a two-hour, in-your-face drum solo. It's more physically demanding than anything I've ever done.

Axes Leftovers: Is there anything you'd like to do, music wise, that you haven't done yet?

Lombardo: Absolutely! I want to be guest drummer on the David Letterman show [CBS's "Late Show With David Letterman"]. That's just one, but for some reason, it continues to stay at the top of my list. If I listed all the things I would still like to do in music, this interview would turn into a novel. I am highly creative. If I'm not on my drums, I'm on my guitar, or in my studio mixing something. I just write. Writing, producing…. Collaborations with like-minded artists keep the creative possibilities endless.

Axes Leftovers: You've been called "The Godfather Of The Double Bass Drum" by Drummer World. How do you feel about that title and is there another title you would rather hold? (Although being a "Godfather" of anything is pretty cool)

Lombardo: I am sincerely honored to have that title. It's amazing. Being so solidly recognized for my skills is still unbelievable to me. I'm grateful. Another title? Hmmmm... My fans come up with some pretty cool titles: "The Machine" "AK47" "The Natural", etc. How about: The Ruler of Rhythm. The Governor of Groove.. The Master of Meter... The Provoker of Pulse… Musical Genius wouldn't suck! Haha! (I can't wait for this to be taken out of context!) All joking aside, labels are limiting... as incredible as it is to be known as "The Godfather Of The Double Bass Drum" there are a whole bunch of other pieces to the drum set that I Iove to punish. With this title, people seem to only watch my feet. Of course, I understand. I mean, until recently, it was a consistent focus of SLAYER's music. It put me on the map. Maybe, once my fans check out a live performance from PHILM, they'll compliment me with another title that will put a little more attention on my other skills. "The Godfather Of The Double Bass Drum" will continue to be an honor and treasured regardless.