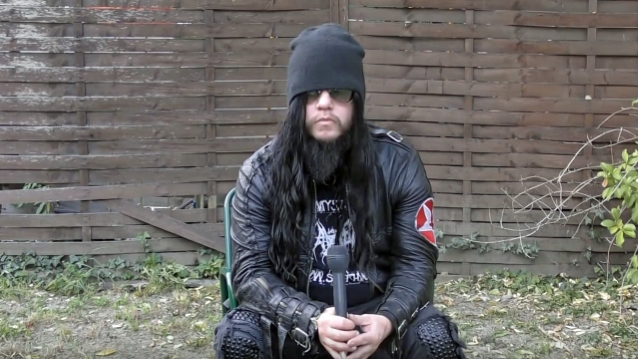 Former SLIPKNOT Drummer JOEY JORDISON: 'All My Health Is Good'

SINSAENUM drummer Joey Jordison (ex-SLIPKNOT) was recently interviewed by Austria's Stormbringer. The full interview can be viewed below. A few excerpts follow (as transcribed by BLABBERMOUTH.NET):

On how he thinks SINSAENUM has changed since the release of the group's first album:

Joey: "The band is always evolving, and the songwriting is always evolving. We have established a certain sound in SINSAENUM, especially with how we construct songs and also with Sean [Zatorsky] and Atilla's [Csihar] voices. I really think that we've stamped [sic] on something that's very special... We've been working on this for a long time. This goes back to even when SLIPKNOT and DRAGONFORCE were touring together. That's how this band was formed. All the shows have been great; the fans have been killer; and we're just building — rising every day. It just keeps going up."

Joey: "[SLIPKNOT] were touring on 'All Hope Is Gone', and we had DRAGONFORCE open up for us. [DRAGONFORCE bassist Frédéric Leclercq and I] just started hanging out, and the next thing you know, we started talking about our love for death metal and black metal and talked about side projects and stuff like that. A lot of bands talk about, 'We need to work together. We need to do this. We need to do that. As soon as we get off tour, we're going to form a band,' but this really came into reality, and now, he were are. It's been a great journey so far, and the journey continues."

On whether he thinks fans buy tickets to see SINSAENUM or because they're fans of one or more of the group's individual members:

Joey: "You know, I don't think about that. I think about the fans, and our performance needs to be directed right to the fans as SINSAENUM. I don't think about SLIPKNOT. Fred doesn't think about DRAGONFORCE while we're out here. We concentrate on exactly where our heart lies and exactly what we're doing. I understand there's fans that I have because of what I've done in the past, but they're also here, and that's why we're delivering the music that we have. They've been very receptive, and we're very thankful for it."

On whether he likes the term "supergroup":

Joey: "I really don't care what people think, besides our true fans. When they show up, if you disappoint them, then that's an issue. Other than that, we just do what we do, and we have a goal — to create the music that we want and get out to as many countries, to as many people as possible, and kill it the best we can. You can't think about what other people think. You just can't. It's stupid. You've got to look inside yourself. That's how we started playing music in the first place. It wasn't trying to impress anyone or do anything. When we formed this band, it wasn't necessarily trying to get out to a bunch of people. It was just something that had to happen... It's not necessarily like, 'You know what? I have an idea — I really like death metal. I really like black metal. I want to form one of those bands.' It was something that was in [Leclercq], something that was in me, and we talked it about it when we were on tour together, and here we are."

Joey: "Everything's fine. Tons of therapy; great trainers. All my health is good. Can't complain. I keep getting this question, and it starts getting annoying. It starts pissing me off a little bit [laughs], but I can kick my leg out. I lost my legs completely, and I start thinking about people that honestly have lost their legs completely — they can't walk or [are] on crutches and stuff like that — and how thankful I am for my trainers and my lady and the determination to be able to get back up on my feet and not let anything beat me."

On how he'd describe the difference between SINSAENUM and his other band, VIMIC:

Joey: "The music is always the same, as far as the mindset, because it's a determination, and it's something that was within the heart. The heart bleeds music no matter what, and it bleeds different types of music. It always has different ideas. It has different structures as far as how you want to portray your personality or how you want to show your creativity to the world. Now, with VIMIC and SINSAENUM, I think it shows a big result and determination of what I went through and where I land now, and [I'm] dedicated to both of those bands 100 percent."