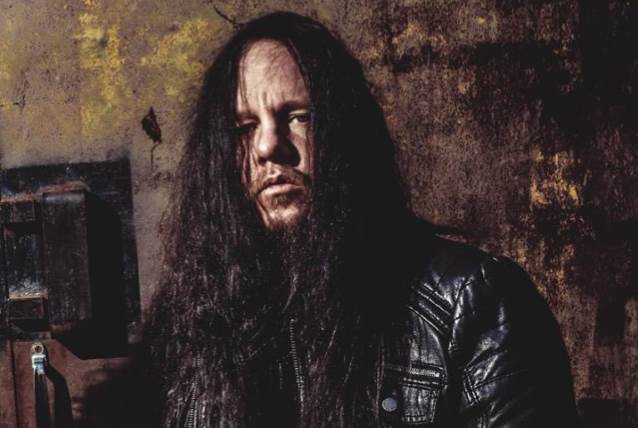 Former SLIPKNOT Drummer JOEY JORDISON: 'I'm Completely, One Hundred Percent Back, Stronger Than I've Ever Been'

Former SLIPKNOT drummer Joey Jordison says that he is back "stronger than ever" several years after he was diagnosed with transverse myelitis, an inflammatory disorder that temporarily robbed him of the ability to play drums.

Jordison, SLIPKNOT's drummer from 1995 to 2013, revealed his fight with the seldom-seen neuro-immune disorder two years ago while appearing at the Metal Hammer Golden Gods Awards in London, England. He later claimed that he was visited by only one member of SLIPKNOT while he was in the hospital battling the disease. He also said that SLIPKNOT fired him because "they thought I was fucked up on drugs."

In a brand new interview with Metal Wani's Jake Patton, Joey offered an update on his health, saying (hear audio below): "I'm completely, one hundred percent back, stronger than I've ever been. And I'm not just saying that — that sounds like a cheesy fucking line; I understand. But it took me a long time, man, to recover and get my strength back, because I got hit with something that… I mean, I never felt anything like this. We all know the flu, the common cold, all that type of stuff. This is nothing like that. I woke up one day and my back was completely on fire. Next thing, my legs were wobbly, next thing you know I collapsed — I lost my legs. It was the scariest fucking thing I've ever went through in my life. And I busted my ass, got the right trainers and I was not not gonna play drums again, because this is what I'm on earth for. And I have a great lady that supported me and killer trainers at Life Time gym and Absolute Performance Therapy here in Des Moines and Waukee."

He continued: "Man, failure was not an option whatsoever. 'Cause I'm here to play music — that's what I've been put on earth for. And I think, honestly, in a weird way, it was a life lesson more than anything. And I wouldn't change it for anything. It sucked that it happened, but the fact that I beat it and came back from it — 'cause a lot of people, they just don't… 'Cause I just was not gonna let this beat me. And being able to be healthy and being able to record these albums that you hear — with SINSAENUM and VIMIC as well — is just a testimony, 'cause I cannot let anything beat me when it comes to music. I have to play. So when you have the power of music within your soul and your heart, nothing can stop you."

Back in 2014, SLIPKNOT singer Corey Taylor told Metal Hammer that firing Jordison after 18 years was "one of the hardest decisions" the group ever made, adding that Jordison is "in a place in his life" which is "not where we are."

Jordison's new band called VIMIC is expected to release its long-awaited debut album in 2019. Joey is also involved in an extreme metal supergroup called SINSAENUM. His bandmates in that project are MAYHEM and SUNN O)))'s Attila Csihar along with former DÅÅTH and CHIMAIRA vocalist Sean Zatorsky, DRAGONFORCE bassist Frédéric Leclercq on guitar and SETH's Heimoth on bass.