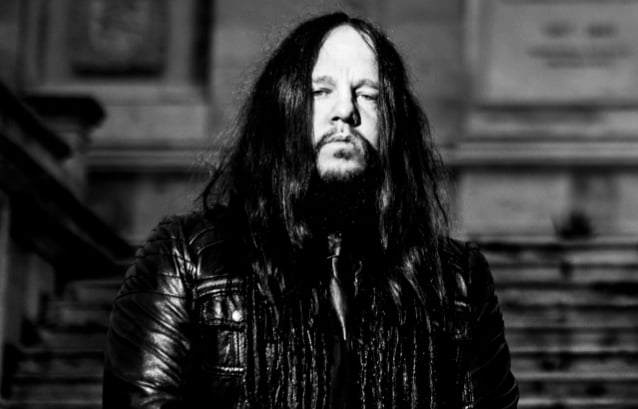 Former SLIPKNOT drummer Joey Jordison has confirmed that he is working on his first-ever book.

The 43-year-old musician, who is currently touring Europe with the international death metal supergroup SINSAENUM, revealed that he will tell his life story in book form during an interview with the Impact metal channel.

"But as far as the book is concerned, I already started it, to be completely honest, and it will just take some time to make sure it's absolutely detailed," he continued. "Because I can't complete it without completing the SINSAENUM tour [laughs], 'cause it wouldn't make any sense."

Jordison also talked about the state of his health, several years after overcoming the neurological condition acute transverse myelitis, an inflammation of the spinal cord which damages nerve fibers, which ultimately led to the drummer temporarily losing the use of his legs.

"[My health is] great," he said. "I'm over here on tour; I couldn't ask for anything more. I've still got VIMIC going, a new record, and I'm doing SINSAENUM right now. I'm just glad to be onstage, man. I'm glad to meet fans every day. Every day is a good day above ground, and especially being able to play metal and being able to your craft and everything. You've gotta respect that, because it's something that can be taken away from you really quick. And a lot of people wish they could be in your position, so if you disrespect your position that you've been given, that's when the trouble happens. But as of right now, man, everything's great. Yeah, no complaints."

Asked if reaching the "bottom" while battling health issues served as an inspiration for him to return to playing drums, Joey said: "[it] asolutely was, because that was the test of who I am as a person. And being able to get back from that, and the people that supported me, and my trainers, and especially my lady, Amanda, I got back from it. And also, when we were doing this SINSAENUM record and forming SINSAENUM, that was a huge thing because that was the real test of playing the most extreme metal drumming I've ever done in my life, and still am doing. That's what fuels me, man. It's, like, you never let anything beat you — ever! 'Cause life will hit you crazy. No one's exempt from it. And being able to come back [and play] with SINSAENUM and [secure] new record deals and all that stuff, it's just great to be over here and be able to play. And I can't wait to get onstage tonight and slay."

Jordison and the members of SLIPKNOT had been silent and evasive about the reasons for his dismissal from the band in December 2013, but Joey finally spoke about it in 2016 while accepting an award at the Metal Hammer Golden Gods Awards in London, England.

Despite the circumstances surrounding his dismissal from SLIPKNOT, Jordison praised the band's latest album, ".5: The Gray Chapter", which features his replacement, Jay Weinberg, as well as new bassist Alessandro Venturella. He said: "I listened to the whole record multiple times. And I think it's great. It's fucking cool and I'm glad they moved on."