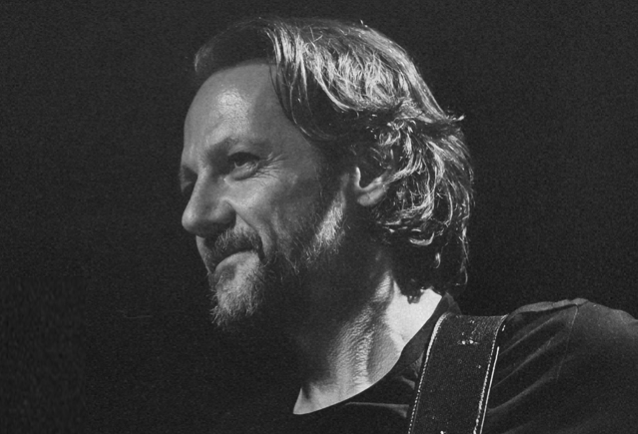 During an appearance on the most recent episode of "The State Of Amorica: A Black Crowes Podcast", former THE BLACK CROWES guitarist Marc Ford confirmed that the was approached twice about becoming a member of GUNS N' ROSES. "I got asked to join that band a couple of different times," he said (hear audio below). "Once when Axl [Rose] was still finishing that record that was taking forever," apparently referring to GUNS' 2008 album "Chinese Democracy". "Right about when I was about to make [my 2002 solo album] 'It's About Time', I got offered to join that band. But the first time, I had just come back from a sort of 'unofficial official,' or whatever it was, joining of THE BLACK CROWES weekend in Atlanta [in 1991]. When I got back home, that Monday morning, Slash had called and offered [me the GN'R gig]. He said that Izzy [Stradlin] was leaving, and did I want the spot. And I said I just joined THE BLACK CROWES. And he was very cool. And he said, 'That's a good gig for you. Right on.'"

Ford's career began in Los Angeles during the 1980s. His group BURNING TREE captured the essence of his guitar virtuosity and songwriting.

He joined THE BLACK CROWES in late 1991. Ford toured and recorded on three of THE CROWES' finest albums — "The Southern Harmony And Musical Companion", "Amorica" and "Three Snakes And One Charm". Ford's tenure in THE CROWES found the group operating at a zenith. He rejoined THE CROWES in 2005-2006 when they toured and released "The Lost Crowes" — two albums the band never released when he was a member.

In 2002, Ford released his first solo album, "It's About Time". During this era, Ford experienced the highs and lows of surviving in a cutthroat music business through the years as well as being a dedicated family man. Ford's following solo albums included "Weary And Wired" (2007),"The Fuzz Machine" (2010) and "Holy Ghost" (2014).

Ford won a NAACP award (John F. Kennedy counts as one of the few other Caucasians bestowed the honor) for his work on the BEN HARPER AND BLIND BOYS OF ALABAMA album "There Will Be A Light".