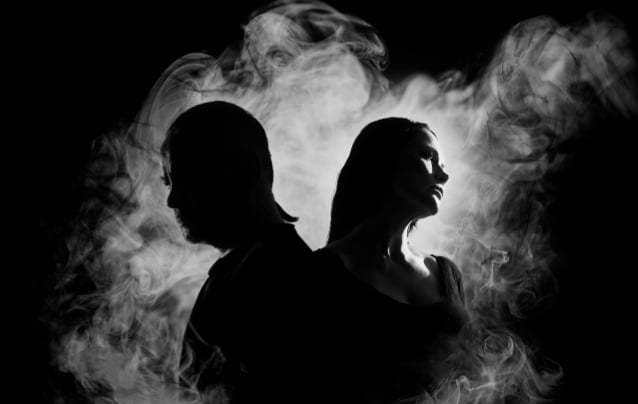 VEIL OF SECRETS' debut album, "Dead Poetry", is set to be released on CD and vinyl through Crime Records this coming fall.

Stene comments: "After some years with no music production or dissemination, I strongly felt an inner longing to create and feel alive through music. So I started to seek a resolution.

"When Asgeir contacted me for the project GOD OF ATHEISTS, we started to share music and ideas, which led to a satisfying process of expressions.

"I've taken the chance to believe that my words, my thoughts, and dreams, could have any value combined with my inner tones.

"The composing process of' 'Dead Poetry' was deeply founded on honesty and trust, and therefore I'm very proud to finally share VEIL OF SECRETS."

Mickelson comments: "Most people know me as a drummer, but I started originally out as a guitarist. After I switched to drums, I didn't play guitar for years, so when I picked up again in 2002, I quickly started writing doom metal riffs.

"To me, there are only two real doom metal albums, which are the CANDLEMASS classics 'Epicus Doomicus Metallicus' and 'Nightfall', so that style is my starting point when it comes to writing slow-paced metal — meaning guitar-driven songs with melancholic and somber melodies.

"For years, I wrote riffs on and (a lot more) off without a real plan, so when Vibeke expressed interest in the songs, it made sense to use them as the basis for a new band. We then went through the material, decided on the initial eight songs, and made some final adjustments before Vibeke breathed new life into them. Then Sareeta lifted the songs even further with her violin melodies. It's not become symphonic — it's still pure doom metal — and I cannot wait to let you finally hear it!"