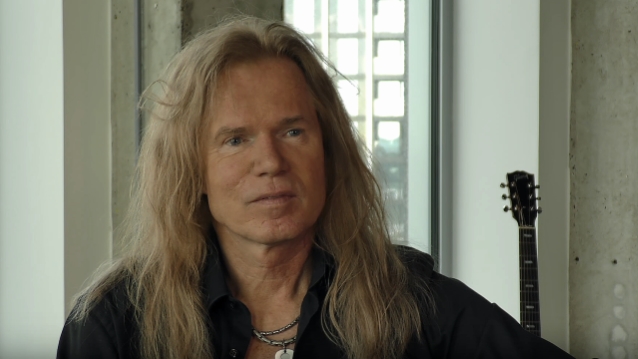 A trailer for "Uur Van De Wolf" (English-language translation: "Hour Of The Wolf"),a new documentary about Dutch guitarist Adrian Vandenberg (WHITESNAKE, VANDENBERG'S MOONKINGS),can be seen below. The documentary, which will premiere tonight (Thursday, November 8) at 23:00 on the Dutch television channel NPO2, was directed by Marcel De Vré and features interviews with Vandenberg, David Coverdale, Steve Vai and many others.

Vandenberg joined WHITESNAKE in 1985 and remained in the group until 1997.

Recalling his refusal to return to WHITESNAKE when Coverdale resurrected the band in 2002, Vandenberg told "White Line Fever" that the singer "wanted to stop altogether because he was kind of worn out on the road. He didn't want to do it anymore… When he called me up and said he wanted to start it up again, I couldn't do it because I had all kinds of obligations for exhibitions for my paintings. And those are always planned a year ahead, because art galleries reserve the space a year ahead because exhibitions usually last three to six months or something. I couldn't do it but we did keep in touch always. We still do."

The guitarist added that he and Coverdale became "very good friends over the years, [so] you never know what might happen... We actually have pretty specific ideas about maybe doing a blues album or an acoustic thing or whatever… Sooner or later it might happen, but right now we're really involved in [other projects]. So this is probably not the time. But I wouldn't be surprised if, sooner or later, we end up doing something together in some kind of format. I was in WHITESNAKE for 13 years, which is quite a long time. I still hold the record, I think."