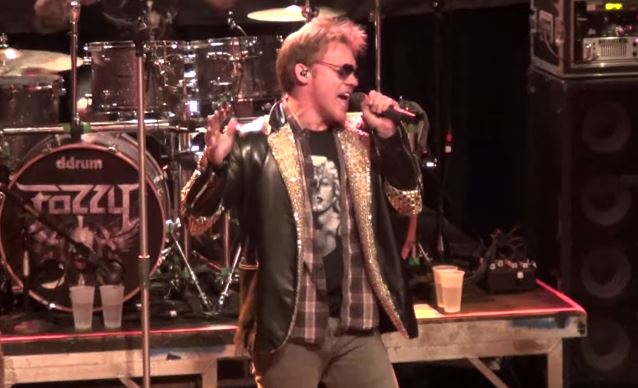 FOZZY, the band featuring WWE wrestling superstar Chris Jericho alongside members of STUCK MOJO, is filming a video for the title track of its new album, "Do You Wanna Start A War". The video shoot is taking place today (Wednesday, July 23) in the Los Angeles area.

"Do You Wanna Start A War" was released on July 22 via Century Media. Produced by FOZZY guitarist Rich Ward, the CD features 12 tracks, including the debut single, "Lights Go Out", the title track and the return of the Theremin in "Bad Tattoo". SLIPKNOT and STONE SOUR singer Corey Taylor recently described the effort as "dark, dense and sharp. Sonically and lyrically, this feels like it's going somewhere big. I love it!"

Regarding FOZZY's musical uproach on "Do You Wanna Start A War", Jericho told the Boise, Idaho radio station 100.3 The X Rocks: "We wanted to do something a little different. We love, obviously, AVENGED SEVENFOLD or FIVE FINGER DEATH PUNCH, we love IRON MAIDEN, we love OZZY [OSBOURNE]. But we also love PINK FLOYD and LED ZEPPELIN and QUEEN and U2 and THE BEATLES, bands that would always broaden their horizons, but still sound… the core of the band's sound was still there, but they would different things. And when we were listening to a lot of songs on rock radio, we felt that they fit a certain pattern. We wanted to do something that was different from that, and that's what 'Lights Go Out' kind of came from that mindset. So it is a different type of tune, but we wanted to do that and shake things up and take a chance. You know, when you do something like that, sometimes your hardcore fans will go, 'Well, this isn't what we've heard before,' but they'll eventually like it. And you do this to appeal to new fans, and that's what we're getting from 'Lights Go Out', who'd never heard FOZZY before, who'd never listened to FOZZY. 'Man, you guys rock! This song is amazing!' That's what you want…. This is a song that you can hear in a strip club, you can hear it in a dance club, you can hear it in next to a SLAYER song. It's kind of got all things to all people. 'Cause all that matters with music and a good song is the melody and the hook. And this has a great hook; you could catch 'Jaws' with this hook, that's how big it is. But it's dark, it grooves, it's sexy, it's sleek, and the chicks dig it, which is the most important thing. 'Cause when the chicks like something, that means the guys will follow."