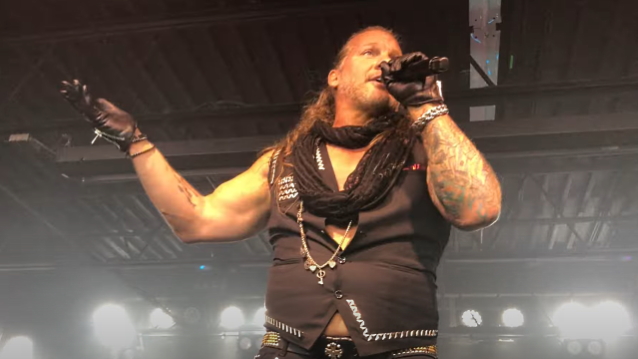 FOZZY was forced to cancel its concert Friday night (December 10) in Swansea, United Kingdom after singer Chris Jericho was hospitalized for a "treatable health issue."

FOZZY was scheduled to perform in the Welsh city as part of a 12-date "Save The World" tour of the U.K. However, the show appears to have been called off after the following statement was posted on the Instagram page of the Sin City club: "We were devastated to learn that FOZZY will have to cancel their planned date with us in Swansea [Friday].

"'Chris was checked into Hospital by doctors, with a non Covid related, treatable health issue. Regrettably the show on Friday in Swansea is cancelled and all tickets will be refunded. Will have updates on Saturdays show in Nottingham and Sunday's show in London as soon as possible'.

"We can only apologise with the unavoidable shortness of the notice we can bring you. We assure you that in a year of closure and rearranged shows, we are devastated to have to remain closed once again.

"We wish Chris an incredibly speedy recovery. We very much hope he and the band are able to complete their UK tour and return safely to their families for Christmas."

Jericho, a former WWE world wrestling champion who currently competes for All Elite Wrestling, has yet to comment on his illness via social media.

A statement on the FOZZY social media read simply: "We are very sorry, but due to circumstances beyond our control, FOZZY will not be able to perform in Swansea tonight. We promise to return soon in the future!"

FOZZY has already played a number of shows in the U.K. on the current tour and was scheduled to finish the run in London on Sunday after playing in Nottingham on Saturday.

FOZZY will release its new album, "Boombox", on April 15, 2022. The LP, which includes the top 10 singles "Nowhere To Run" and "Sane", was once again produced by Johnny Andrews.