FOZZY's CHRIS JERICHO: 'It's Our Mission To Destroy IRON MAIDEN' At Next Summer's Concert In Los Angeles

FOZZY frontman Chris Jericho says that it will be his band's "mission to destroy IRON MAIDEN" when the two groups share the stage in California next summer.

It was announced last month that Jericho and his bandmates will support the British heavy metal legends on September 14, 2019 at the Banc Of California Stadium in Los Angeles.

The Canadian-born WWE wrestling superstar, who has fronted FOZZY since the group's inception nearly 20 years ago, spoke about the upcoming concert during a recent interview with Drew Dalby of the 104.9 The Wolf radio station.

Asked if it's a "bigger deal" for him to play a headlining show in his former hometown of Winnipeg or to open for IRON MAIDEN in Los Angeles, Chris responded (see video below): "Both of them. Any time you play in front of your own audience, that's easy — you put on a great show; people respond; everyone has a good time; it's a very gratifying experience. When you're opening for any band… Earlier on this tour, we did some shows with THREE DAYS GRACE, and there was a lot of people that maybe have never heard of FOZZY, or have heard of us but never heard us. Or maybe they have no idea: 'Who the hell is this first band? I'm just gonna show up and drink beer,' or whatever. So we have a different job. You have to impress those people. And so, at the end of the night, when they're chanting 'FOZZY!' and giving you a standing ovation, and you're the first of three bands, that's incredible. Now, IRON MAIDEN is a whole different animal, because they're notorious for having fans that don't care about the opening band. I don't think I've watched an opening band for IRON MAIDEN in 10 years; DREAM THEATER, I think, opened for them once, and I watched that. But they're an institution, and there's gonna be 20,000 people watching, but we'll get 'em. And that's gonna be very, very exciting too."

He continued: "There's never one show that means more than another. There's different-size venues, there's different situations, but when 'Judas' starts — we open with 'Judas' — it doesn't matter. All that matters is if you're entertaining 10 or 10,000; 200 or 20,000. Whatever it may be, every show counts, every show's important and every show, it's my responsibility — our responsibility — to make it great."

Jericho went on to say that, while his respect for IRON MAIDEN runs deep, he and his bandmates will do their best to try to blow the headliners off the stage when the two groups cross paths in September.

"When we got the offer to do [the show], and then the poster came out, I stared at the poster for about 30 minutes," he admitted. "'Cause IRON MAIDEN's my favorite band and have been since 1984. I looked at the poster — 'IRON MAIDEN with special guest FOZZY. L.A. Banc Of California Stadium.' I just looked at it, like, 'Wow! I can't believe it.' And then once I stopped looking at it, I had my moment, and I said, 'Okay. Now it's our mission to destroy IRON MAIDEN.' Now, is it possible? I don't know. But we played the 'Kiss Kruise' and we played at the same time KISS was playing — for whatever reason. Someone's gotta play upstairs, and there must have been a hundred people, but I was, like, 'You know what? I'm going to make sure that this is the best show these people see this whole cruise.' And that's what you have to think."

Jericho added: "Are we gonna destroy IRON MAIDEN at their own show? I don't know. But I do know that we're gonna do everything in our power to have the best possible gig and we're gonna leave an impression so that when we leave the stage, people go, 'Holy shit! We didn't expect that. That was amazing. That was great.' And people will go — and this is what happens every time — 'IRON MAIDEN was awesome. I loved it. But you know what? FOZZY — I never expected that.' And that's how you build [a fanbase]."

FOZZY's latest album, "Judas", came out in October 2017 via Century Media. The production duties on the disc were handled by Johnny Andrews, who co-wrote FOZZY's "Lights Go Out" track back in 2014 and has written songs with the likes of ALL THAT REMAINS, THREE DAYS GRACE and HALESTORM in the past.

Jericho recently told WDHA-FM 105.5 FM that FOZZY will re-team with Andrews for its next album. 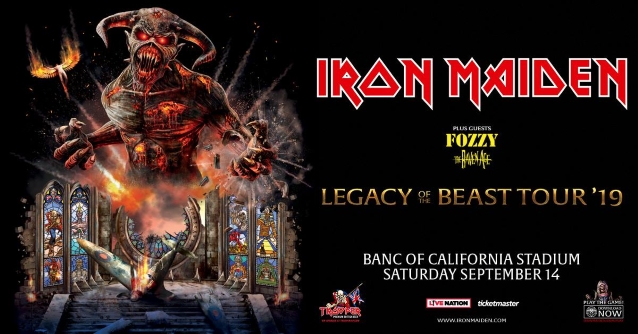