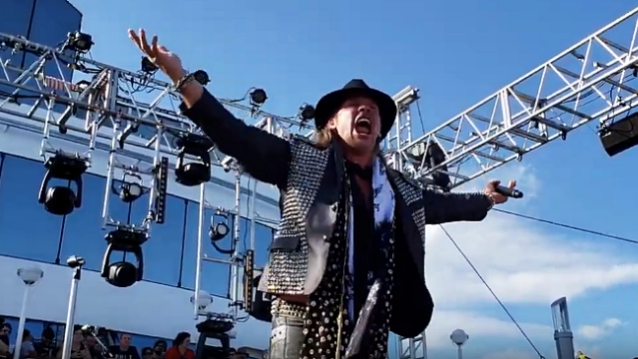 According to the Los Angeles Times, FOZZY frontman and former WWE wrestling superstar Chris Jericho is selling a home in Odessa, Florida for $1.149 million.

The one-story lakefront estate in a Tampa suburb sits on a two-acre lot and features 4,872 square feet of living spaces, including four bedrooms and 4.5 bathrooms.

Acclaimed actor, wrestler, musician, author, podcaster, game show host and television personality, Jericho has established himself as a multi-faceted performer with millions of fans worldwide. Jericho is one of the most popular performers in the history of World Wrestling Entertainment. In 2001 he was crowned the WWE Undisputed Champion and in 2017 become the first ever "Double Grand Slam" champion in WWE history. He has been named one of the top five most charismatic performers of all-time by WWE.com. In January 2019, he officially signed with All Elite Wrestling — a brand new pro wrestling company started by the owners of the NFL's Jacksonville Jaguars, Tony and Shahid Khan.

Chris is the lead singer of the internationally successful rock band FOZZY, whose seventh album, "Judas", has over 20 million streams on Spotify, while the hit single title track has over 29 million YouTube views, was No. 1 on iTunes charts in eight different countries and spent nine weeks in the top ten on the Active Rock Charts in the USA.

Jericho is also a four-time New York Times bestselling author with his autobiographies 2007's "A Lion's Tale: Around The World In Spandex", 2011's "Undisputed: How To Become The World Champion In 1,372 Easy Steps" and 2014's "The Best In The World: At What I Have No Idea" and "No Is A Four Letter Word" all displaying his witty, self-deprecating writing style.

Chris was a popular contestant on Season 11 of "Dancing With The Stars", hosted the ABC game show "Downfall" and the Syfy reality series "Robot Combat League" and received huge social media coverage for his appearances on "Whose Line Is It Anyway", "The Tonight Show" and AMC's "The Talking Dead".

Jericho's acting credits include featured roles in the Kevin Smith films "Kilroy Was Here" and "Jay And Silent Bob Reboot", Comedy Central's hilarious digital series "Nothing To Report", Nickelodeon's "The Thundermans", as well as creating, producing and starring in CBC's critically acclaimed original series "But I'm Chris Jericho", with Season 2 released in December 2017.

Pro wrestler Chris Jericho seeks new champion for Florida home: Former WWE star Chris Jericho is looking to knock out a home sale in Odessa, Fla. His lakefront estate, complete with 175 feet of water frontage, is on the market for $1.149… https://t.co/PF5QjdlAzX TheResistance pic.twitter.com/AGabdmTvCr