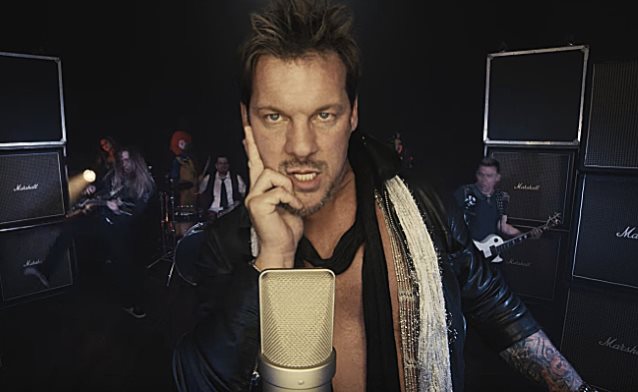 FOZZY's CHRIS JERICHO: We Realized The Only Chance We Had To Make It To The Next Level Was By Being Ourselves

Johnathan Ramsay of Ride Music conducted an interview with FOZZY frontman Chris Jericho prior to the band's November 5 concert in Newcastle, England. You can now listen to the chat below.

Speaking about the evolution of the FOZZY sound, Chris said: "You can see the progression [over the years]. And it really started on 'Chasing The Grail' in 2010 — that's when we really went full force with FOZZY and gave it its due as far as being a full-time thing. But I think [2012's] 'Sin And Bones' is where we really started figuring out who we are as a band — very heavy, a lot of melody, a lot of harmony, a lot of groove. We realized at that time that the only chance we had to make it to the next level was be ourselves — not follow the trends, not be anything else other than what we wanna do."

He continued: "We love bands like GUNS N' ROSES and U2 and LED ZEPPELIN and THE BEATLES and METALLICA that weren't afraid to take chances… You know, David Bowie, QUEEN… QUEEN has 10 different types or styles of music, but they're still all QUEEN. And that's what we said: 'You know, we'll just do songs that we think is right, and it'll still be FOZZY, when Rich Ward is playing guitar and Frank Fontsere is on drums and Jericho is singing.' 'Lights Go Out' [off 2014's 'Do You Wanna Start A War'] was the dance-pop stripper metal song — I don't think there's ever been a genre like that, but we kind of created it. And [FOZZY's latest album, 'Judas'], with 'Weight Of My World' and 'Burn Me Out' kind of has some elements of 'Lights Go Out' that led to those songs."

FOZZY will continue to rock its fans across America on the "Judas Rising" tour, with newly added dates in 2018. Set to launch February 28 in New Orleans, Louisiana, the 25-date trek will cross the entire country before coming to a close on April 8 in Hampton Beach, New Hampshire.

"Judas" was released on October 13 via Century Media. The production duties on the disc were handled by Johnny Andrews, who co-wrote FOZZY's "Lights Go Out" track back in 2014 and has written songs with the likes of ALL THAT REMAINS, THREE DAYS GRACE and HALESTORM in the past.