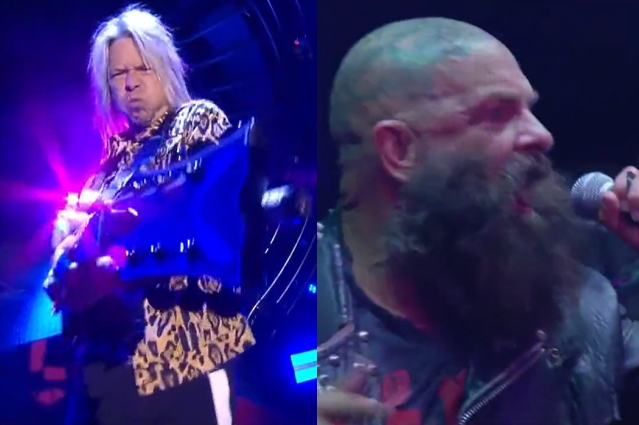 Rich Ward from FOZZY played a live guitar rendition of Britt Baker's entrance theme when Baker and Ruby Soho clashed in the Owen Hart Foundation Women's Tournament finals at All Elite Wrestling's "Double Or Nothing" pay-per-view event Sunday night (May 29) on the Las Vegas Strip. Then Soho, whose real name is Dori Prange, topped that by getting RANCID to play her entire theme song to the crowd at the T-Mobile Arena. Prange's wrestling moniker is inspired by the RANCID classic and was initially a suggestion from RANCID guitarist and wrestling fan Lars Frederiksen.

FOZZY frontman Chris Jericho currently competes in AEW and is the leader of the new faction The Jericho Appreciation Society, which was formed back in March. Joining Jericho in the faction are Matt Menard, Angelo Parker, Daniel Garcia and Jake Hager.

Asked in a 2014 interview with Vice why he thinks so many punks are also wrestling fans, Lars said: "It's probably because it we all know who the other misfits are. I think it's the excitement. For me, I discovered it because, when I was punk and everyone was making fun of me, wrestling was where I could go to escape. I could watch nine hours of wrestling on a Saturday, you know? You could get the fucking WWF at 10 a.m., then what was next? AWA at noon, then you'd get the Gorgeous Ladies of Wrestling from 1 to 3 p.m., then you'd get Georgia Championship Wrestling on TBS, and then, maybe if you're lucky, you'd get a Saturday Night's Main Event. Then, at 11 p.m., you'd get a Mid-South thing. So, I would just sit at home on a Saturday and absorb everything; that's where I saw The Freebirds and Ric Flair, and all those guys. I just loved it. I think you're absolutely right that there's strong correlation between punks and wrestling fans, but I don't know what exactly it is. Most punk rockers I know love wrestling."

Eight years ago, Jericho, who made a name for himself stateside first in ECW, then WCW, before becoming a Hall Of Fame-caliber performer during his time in WWE, told the Miami Herald about connection between music and wrestling: "There's a lot of similarities between the two. They're both very high-energy, aggressive forms of entertainment, very dependent on the reactions you get from the crowd. If the crowd is excited, it makes for a better show — both in wrestling and with FOZZY. So you get a lot of crossover because there is that certain vibe in both. Certainly WWE superstars are like rock stars — larger than life, over the top personalities — and that's what you're always looking for in rock-n-roll. Sometimes you get it, and sometimes you don't, and sometimes you get that in wrestling, and sometimes you don't. Especially when you go to a WWE show with all the fire [and loud noise] and pyrotechnic, a lot of times it's more than a rock show, than a rock show you might see. There is a common ground between the two."

FOZZY's latest album, "Boombox", was released on May 6. The LP, which includes the top 10 singles "Nowhere To Run" and "Sane", was once again produced by Johnny Andrews.

Introduced by the shredding @thedukeofmetal, Dr. @realbrittbaker DMD makes her way to the ring for the #OwenHart Foundation Women's Tournament Final! Order #AEWDoN NOW on @BleacherReport & Internationally on @FiteTV / https://t.co/30z8K48kUTpic.twitter.com/GjktMVW6rQ

Destination Unknown! What better way to introduce @realrubysoho, than by @Rancid themselves! Order #AEWDoN NOW on @BleacherReport & Internationally on @FiteTV / https://t.co/30z8K48kUTpic.twitter.com/fiLjHsmVEX

Absolute honor and privilege to play the amazingly talented @realrubysoho to the ring tonight for @AEW Double or Nothing. She will always be our number one gal and we will always love her. pic.twitter.com/QR6Ga3By70