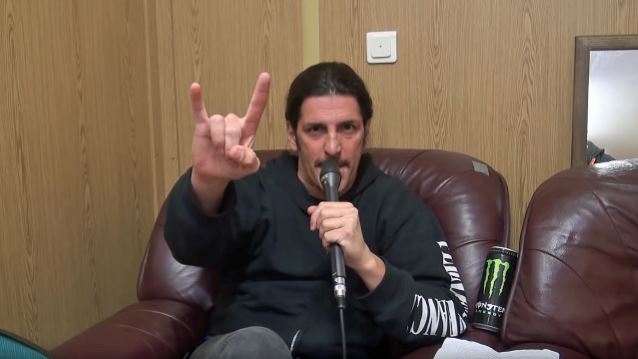 FRANK BELLO: 'ANTHRAX Is At The Top Of Its Game'

Kaaos TV conducted an interview ANTHRAX bassist Frank Bello prior to the band's July 9 performance at the Jalometalli festival in Oulu, Finland. You can now watch the chat below. A couple of excerpts follow (transcribed by BLABBERMOUTH.NET).

On how the music business has changed since ANTHRAX first started in the early '80s:

Frank: "Well, from 25 years ago, when we started, Internet [laughs], to begin with. Look, to be real about it, people don't really buy music, unfortunately. The Internet makes it easy to illegally download. That's really killed the business of music. So what happens, and you've probably heard this from other bands, you have to stay on the road and go out and make a living that way. You sell merchandise. This is how you support your bands. I always ask people, 'If you like the band, support it and buy…' How much is…? A ten-dollar CD. You know what I mean? It's not really that much. It's two cups of Starbucks coffee. It's the way I look at it now — not only from being the musician guy, but I'm just looking at it in a real way. It's like, really — [for the price of] two cups of coffee from Starbucks, you can buy this band's CD and support them. It's a big deal, because this could all go away one day for all music. And I think it should be fed, 'cause music is one of the gifts that we've [been] given; it takes us away from our daily pain that life can bring us. And music's always been great to me, so I wanna pay back to music."

On ANTHRAX firing on all cylinders right now:

Frank: "I just feel very fortunate. I think ANTHRAX is at the top of its game — in both ways. The writing… I think wea re in a good way of writing. What we have going… We tapped into something really good of how to work with each other writing, what's coming out of us, and it's really paying off with people, connecting to people. So from that point of view there, then that leads to the touring. Every time we think we can take a break, we're asked to do another tour, which is great to be wanted. It really is, because it's a tough business, and we know that. So the only way you get your music out now is to play out there and really to make people understand you have a new record, and hear it, and create the buzz. And so far it's been nothing but amazing."

ANTHRAX's latest album, "For All Kings", sold 34,000 copies in the United States in its first week of release to land at position No. 9 on The Billboard 200 chart.