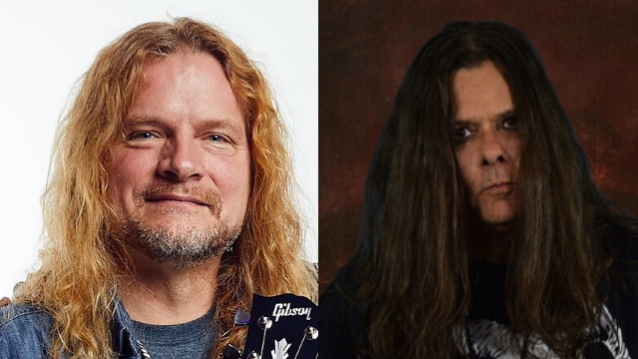 TESLA guitarist Frank Hannon recently answered a number of fan-submitted questions during an appearance in the WRIF Virtual Rock Room. Asked if TESLA will ever work with former guitarist Tommy Skeoch again, Hannon said (see video below): "I have to tell you, I love Tommy Skeoch. I just did an online masterclass — the Rock 'N' Roll Fantasy Camp — and I broke down 'Modern Day Cowboy' and how Tommy and myself collaborated and worked on that music together.

"When we were kids, Tommy Skeoch and myself, I was 16 and he was about 19 or 20," he continued. "I used to really look up to him — I was a huge fan of his style, and still am, a great fan of his guitar playing. We were like best buds. And then we would collaborate and write songs like 'Modern Day Cowboy' or any of those TESLA songs, we'd write 'em together. But as time went on, man, the egos and the problems — myself included — throughout the years, the competition, it really drove a wedge between us. And the drugs and alcohol just really destroyed our relationship, I've just gotta be honest. We weren't supposed to talk about this stuff, but now I figure it's been long enough.

"I don't see that TESLA will ever go back, because we love [Tommy's replacement] Dave Rude, and Dave has really been a great addition to the band. And it would be disrespectful to him to go backwards to a toxic thing, a relationship that really got very toxic.

In a May 2020 interview with "The Classic Metal Show", Skeoch was asked if he thinks people are now more aware of the "edge" that he brought to TESLA while he was a member of the Sacramento-based act, on and off, for two decades. "Absolutely. Oh, yeah," he responded. "To me, it's been apparent from the get-go, but even early on, on my Facebook pages, just everyone, all they ever say is, 'We still love TESLA, but it's just a different band. There's no balls there now.' And these are not my words, man. I wasn't gonna say anything, 'cause it's just not appropriate. But, yeah, I think it's a different band, and maybe not for the best. That's my opinion. Everyone has an opinion. If they wanna listen to some more loungey, more kind of pop, lighter music, they're doing that now. And if people like that, then go for it. I like to rock hard."