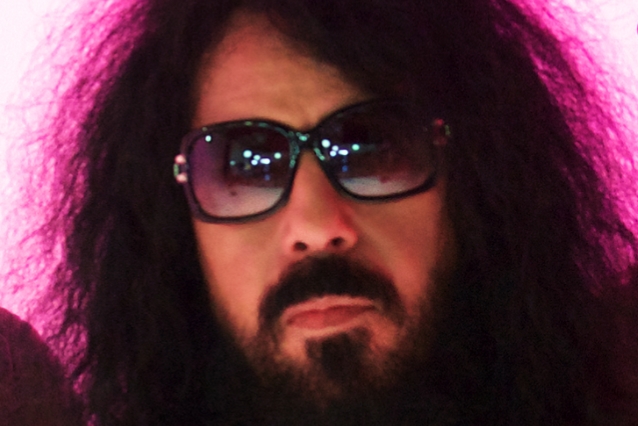 FRANKIE BANALI: 'JUAN CROUCIER Had Nothing To Do With Me Being In QUIET RIOT'

Frankie Banali has shot down Juan Croucier's apparent claim that he was responsible for connecting the drummer with QUIET RIOT almost four decades ago.

Banali made his comments in response to an entry on the "Discography" page of the RATT bassist's web site, which lists his activities for the year 1981 as "Quiet Riot: Rehearsed and never did any show's [sic] but did bring Frankie B. into the band."

After the Sleaze Roxx web site posted an article pointing out Croucier's purported involvement with QUIET RIOT, Banali set the record straight, explaining that Juan never played with the band and insisting that Croucier "had nothing to do" with the drummer being in QUIET RIOT.

Banali wrote: "I love Juan and he's a great bassist and singer. Having said that, Rudy Sarzo [bass] and I have known each other since 1972. Rudy introduced me to Kevin [DuBrow, vocals] when Rudy joined the Randy Rhoads-era QUIET RIOT in the late 1970s. As a matter of fact, I went down and jammed with Randy, Kevin and Rudy, all of this well before Juan was briefly involved with DUBROW, not QUIET RIOT."

He continued: "As everyone knows, there were only two bassists in the Randy Rhoads-era QUIET RIOT, Kelly Garni and Rudy Sarzo. Randy Rhoads was the one who told Kevin he should get me to play drums in DUBROW after I had rehearsed for a week with Randy, Ozzy [Osbourne] and Dana Strum on bass. All of this a matter of record, you can find this in many interviews that Kevin DuBrow did before he passed. But you can also ask Rudy Sarzo to verify the validity of these facts. Juan had nothing to do with me being in QUIET RIOT."

In addition to Banali, QUIET RIOT's current lineup includes singer James Durbin, bassist Chuck Wright (who has been in and out of the group since 1982) and guitarist Alex Grossi.