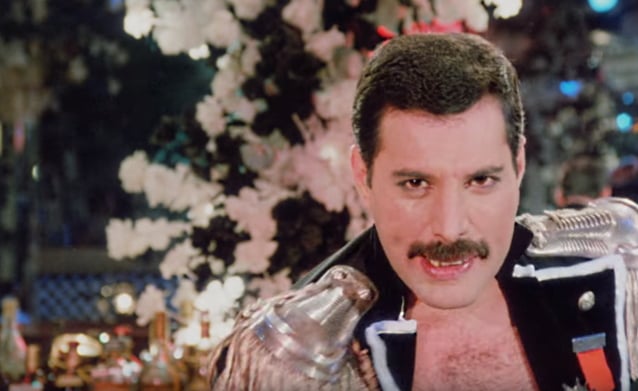 Tying in with the upcoming October 11 release of the Freddie Mercury"Never Boring" solo box set, this week will see a brand new version of perhaps Freddie's most (in)famous solo video — for his single "Living On My Own" from his "Mr. Bad Guy" album, released on YouTube.

The album is one of three within the box set in a newly mixed 11-track special edition. The package also includes a new 12-track compilation of many of Freddie's greatest solo performances and a nine-track 2012 special edition of the "Barcelona" album. The three are also available to buy individually.

The 2019 4K video re-created from the original film rushes and the new audio mix of "Living On My Own" goes live on YouTube this Friday, October 4, and Freddie would probably be smiling down from above.

Shot on a revolving ceiling mounted 35 mm camera throughout the entire night while 300 of Freddie's closest friends partied hard at Munich's infamous Mrs. Henderson transvestite club all decked out in black and white drag (mandatory),the footage shot by Austrian director Rudi Dolezal shocked Freddie's record company boss Walter Yetnikov when it was delivered. So much so, he promptly banned the high-spirited footage from being seen on television on the grounds of its "perceived promiscuity." The video was instantly shelved and the single stalled at No. 50 on the chart.

It wasn't until the single's No More Brothers' remix re-release on EMI in 1993 that the video finally saw the light of day. The single this time reached No.1 and became the biggest selling single of the year in Europe. In 1994, Freddie posthumously received an Ivor Novello Award for International Hit of the Year.

The "banned" party footage has since become the source of Freddie's most popular and most seen solo video.

Now in high definition and enhanced sound, we can again join in that night at Mrs. Henderson and remember Freddie's sense of fun. Freddie would surely grin over the fact that his most legendary birthday can still bring a smile to us all these years later.