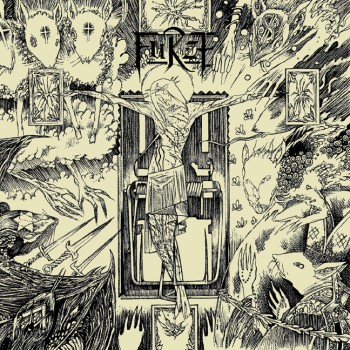 FURZE To Release 'Psych Minus Space Control' In May

Norwegian black metal deconstructivist cell FURZE has completed the fifth chapter in the band's curious discography, and is prepared to release its most psychedelically-inclined blackened rock spectacle to date in the form of "Psych Minus Space Control".

Those who have studied previous releases cultivated by the Furzement are aware how each album this rogue outfit unleash steadily dumbfounds and intrigues, the more adventurous musical deviants immediately come back for more. The songs of FURZE are almost completely cultivated by the infamous Woe J. Reaper — who metaphysically cultures these hymns, from inception, through execution, all the way into production of the final product including the cultivation cover artwork and overall aesthetics of each release's delivery.

A plethora of FURZE releases have infiltrated the masses over the past fourteen or so, years including several EPs and a slew of scattered demos, amidst four LPs. "Trident Autocrat" (2000) and "Necromanzee Cogent" (2003) were initially released on Apocalyptic Empire Records and later reissued by Candlelight Records directly after releasing the UTD full-length worldwide in 2007, followed by the 2010-released "Reaper Subconscious Guide" via Agonia Records.

The newest opus in this lineage of experimentalism, "Psych Minus Space Control", defies even the unconventional practices of past FURZE albums, more rock/jam/broken-prog-oriented than ever, yet not without the usual oddities evenly mixing up the entire production. Recorded in three different studios, with sessions dating over ten years, the album contains material dating back to 1992. With over ninety percent of the LP lying in the vocal-free realms, the overall odd-yet-infectious qualities of the 43 minutes "Psych Minus Space Control" bears let the music do the preaching, and transport the listener to questionable, otherworldly realms, whether you wanted to be taken there or not... FURZE transgress the borders of black metal and classic psychedelic rock, evoking a mystic sensation of terror and elevation, suggesting a musical archetype where the powers of SUN RA, HELLHAMMER and BLACK SABBATH come into one.

"Psych Minus Space Control" will see release under the banner of Fysisk Format, a Norwegian label responsible for releases by OBLITERATION, ARABROT, OKKULTOKRATI and more, and will be available to the North American public on May 15, under distribution of RedEye USA.