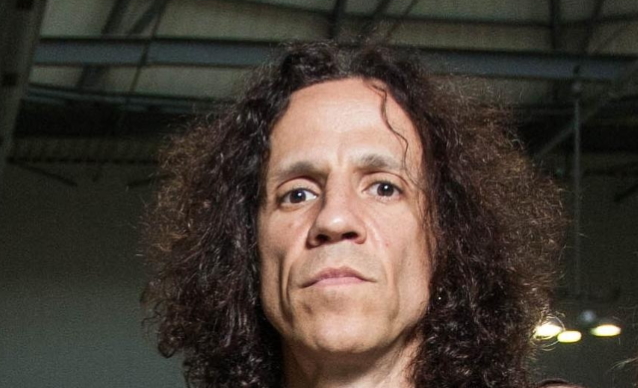 GARY CHERONE Says He Rekindled His Friendship With EDDIE VAN HALEN In 2015: 'We Picked Up Where We Left Off'

The third VAN HALEN frontman, Gary Cherone, who took over when Sammy Hagar left the group (or was fired, depending on whom you ask) in 1996, spoke to SiriusXM's "Trunk Nation With Eddie Trunk" earlier today (Thursday, June 16) about the band's legendary guitarist Eddie Van Halen who died in October 2020 after a battle with cancer. He said (as transcribed by BLABBERMOUTH.NET): "[Eddie and I] rekindled our relationship end of 2015, '16. I reached out to him and we picked up where we left off. It was wild, because we went back and forth and we talked. And then when I went out to L.A., I finally got to see him, and it was great. He was going through [his cancer treatments at the time]. All he said to me was, 'I'm kicking its ass.' And at the time he was. He'd have good days. There was one time I saw him, and he was just getting back, and he was just, like, 'Ah, man. I'm not feeling great.' And [I was, like], 'That's cool. We can just hang for a little while.' But he was great. I think the last six months it got real quiet. I reached out to him a few times. And he got back to me later. I just had a feeling something was going down."

When asked if his conversations with Eddie were mostly of a personal nature or if they included any discussions about possibly working together again, Gary said: "It was [mostly us talking as] friends. But there was a couple of conversations. Little did I know, until it was confirmed by [Eddie's son] Wolfie after Eddie passed… I remember hanging out with Eddie and he was talking about the [proposed] 'kitchen-sink' [tour] — not in those terms. It was around the time [of their] 40th anniversary and they were talking about getting together to do something, I think with Dave [Lee Roth]… So the conversation I had with him was I said, 'Yeah, when you do that, Ed…' — it wasn't the kitchen-sink thing. When they were talking about doing something again with those guys, I remember saying to him, 'Hey, if it doesn't work out, I know a singer for cheap.' And he laughed. And he looked at me, and at the time he goes, 'You never know.' And I remember thinking, 'That was odd.' I just remembered him saying that, and then when Wolfie said it, after he passed, I go, 'That was his reference.'"

Cherone also talked about his sole release with VAN HALEN, 1998's "Van Halen III", which was a commercial disappointment. He was dismissed from VAN HALEN soon after the tour ended.

"I wish I went on tour with the guys before I did the record," Gary said. "'Cause it was a project that turned into a band. We wrote from the first day on, and that was great, and we hit it off, but you had to feel each other out. But by the time we were on tour, it was a brotherhood. So when we got back in and we would write write, we would jam, scat over things, that's when things felt good. 'Cause I was feeling my way around too. I was comfortable there, but I thought it locked in. That '98 tour was great. I thought Eddie was on fire. The setlist was both eras."

In November 2020, Wolfgang Van Halen revealed that his father had contemplated a "kitchen-sink tour" that would have included bassist Michael Anthony, as well as vocal turns from both Hagar and Roth. There was even talk about bringing back Cherone.

Back in 2015, Cherone told the "Talk Is Jericho" podcast about performing the classic VAN HALEN material during the band's shows: "I grew up on the Dave stuff, I knew the Sammy stuff, but during Sammy's [era with VAN HALEN], I was embarking on EXTREME. I remember looking at Michael Anthony and going, 'You've gotta help me with this song.' [Sammy's range was so high] it was insane. Actually, I said it to him before, when I went on tour with VAN HALEN, doing the Sammy stuff made me a better singer, because I had to find a way to do it or get kicked out of the band. And that stud you can't cheat. So I'm singing 'Dreams'… Some nights I couldn't do it… just tired, you know. 'Cause you find your comfort zone. When you're challenged with other people's music, those were cover songs. Two of thirds of [the live set], [I was] doing classic VAN HALEN. The Dave stuff was great — I loved it, I knew it — but, vocally, it wasn't a challenge. To do the Sammy-era stuff was very challenging. I came out of that experience a better singer. Some of the stuff I did post-VAN HALEN — whether it was solo stuff, TRIBE OF JUDAH stuff or later EXTREME stuff — my range grew because of that."

Elaborating on how he approached singing VAN HALEN material that was originally performed by Roth and Hagar, Cherone told "Talk Is Jericho": "I understand why Sammy probably… He was more a Dave contemporary… They were around the same age, they both had their own careers, egos and pride and all that… Not necessarily egos… But Sammy had his own career. Again, they were from the same generation. Me, I was [from the] following generation. EXTREME was influenced by VH. And I knew going into VAN HALEN, you were gonna have your diehard Dave fans, diehard Sammy fans, so I was gonna do anything to endear myself to the audience. What was I gonna be? A prick? And go out there and go, 'No, I'm only gonna do 'You Really Got Me' and one Sammy song. I'd be pulled out on a hook. But, believe it or not, man, [it was] one of my favorite tours. Eddie was playing his ass off. The band was passionate, and we were all over the place on the stage. I was like a kid in a candy store singing those songs. Those were no-brainers. I remember Alex [Van Halen, VAN HALEN drummer], during rehearsals… Because of that, because of his time with Sammy, and Sammy only did selected songs — only a few — he was, like, 'What do you wanna do?' I said, 'I wanna do tracks that you guys haven't done in twenty years: 'I'm The One', 'Romeo's Delight'.' And they were, like, 'All right. Cool.' And I remember those guys having more of a hard time learning some of the older tracks."

Cherone went on to describe "Van Halen III" as "more of an Eddie record. He was coming out, at the end of the Sammy period… I don't wanna get into all that stuff. But I think Eddie was feeling his oats," Gary explained. "And I came in, I was writing. He sat at the piano. When Eddie sat at the piano, I'd say, 'Play that again.' And we would do something a little bit outside the VH circle, what was expected. Looking back on it, I would have arranged some of those songs differently. In hindsight, you can do that with all your records. And that was a battle I had with some of the EXTREME songs. I think it's a guitarist-singer thing. Some of those arrangements were a little unorthodox, especially coming out of that VAN HALEN world. So if I was to do that record again, some of those songs would be shorter."

Regarding how his stage presence in VAN HALEN was different from those of Roth and Hagar, Cherone told "Talk Is Jericho": "That's funny, 'cause… Over time, I think, in the VAN HALEN fan base, they maybe appreciate it a little more. But I wasn't cut from the Roth school, I wasn't cut from the Sammy school. [They're] both great frontmen. Sammy got shit for not being like Roth. And me, some of the influences I had, whether it was [Steven] Tyler or [Freddie] Mercury… Those were the guys that kind of inspired how I became a frontman… Or [Mick] Jagger… I'm more Jagger school than the Roth school. It was funny. When I got to meet Sammy, we would talk about the history, and he'd tell me some old stories. And I would say, 'I got a lot of shit from fans. They would give me the finger all night 'cause I wasn't you, or I wasn't Roth.' And he goes, 'Get over it! I was getting that for ten years.' So it was funny. Sammy kind of put things in perspective for me. But the majority… That experience with VAN HALEN, I look at it as, that's on my application. The next band, I can say, 'Well…' I can go, 'I have a good resume.'"