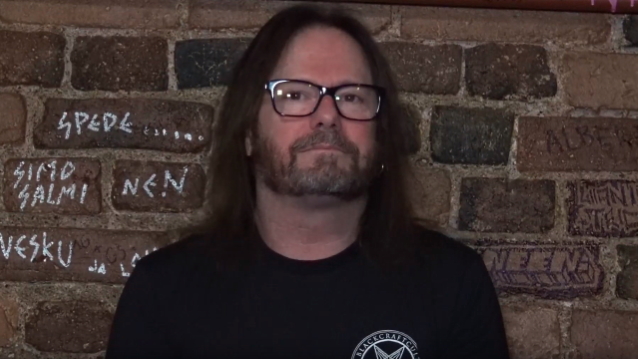 This past Wednesday (February 12),EXODUS guitarist Gary Holt spoke to Finland's Kaaos TV about the band's plans to make the follow-up to 2014's "Blood In Blood Out" album. He said (see video below): "We'll be in the studio hopefully this summer. We're staying home this summer, except for one show at the Dynamo festival [in the Netherlands]. We're not doing a European summer festival tour or nothing, and we're just gonna work on the new record. And it's fucking heavy. [Laughs] It's so heavy. [Laughs]"

Gary went on to say that he has "a lot of stuff" already written for the next EXODUS LP. "I never stop writing," he revealed. "I've got enough riffs for five albums right now. I'll keep writing right up till we start recording."

As for a possible release date for EXODUS's new effort, Holt said: "I hope to have it out this year — like late in the year. We'll see how the scheduling goes and all that."

Holt also talked about returning to EXODUS as a full-time member after playing with SLAYER for nearly a decade as the replacement for late guitarist Jeff Hanneman. He said: "[When I first started playing with SLAYER], I thought I was just going to step in and help the guys out until Jeff could come back. And I thought maybe [I would stay there for] six months tops. And tragedy struck, and next thing I know, it's almost nine years. And it was nine great years, and we had a lot of fun, despite the tragedy that resulted in my still being there. But at the end of the day, I'm happy to be back here. This is my family. SLAYER is my family too. This is my first family. They're second family. And these guys are my childhood friends. So it's good to be back with 'em."

Gary also shot down the suggestion that playing with SLAYER inspired him to write new EXODUS material. "[Those are] totally different worlds," he explained. "My job in SLAYER was play the songs, play them well and go out and shred as fast as I can for the whole show. And it was cool. And it was good for my lead chops, 'cause there's a lot of solos in the SLAYER songs, especially for me, 'cause I did all of Jeff's solos, and Jeff had a lot of leads. So it was cool. I got to shine and do my thing and stuff and do it in front of a lot of people. But I'm happy to be back where I belong."

Holt joined EXODUS in 1981 shortly after the band's formation, and has been its main songwriter ever since. Holt has performed on every EXODUS album, and is considered highly influential in the world of thrash metal. In 2011, he began filling in for Hanneman at SLAYER live shows, and became the band's full-time co-guitarist as of 2013, while remaining a member of EXODUS. In October 2014, EXODUS released its tenth studio album, "Blood In Blood Out", on the Nuclear Blast label.

"Blood In Blood Out" marked EXODUS's first album since the departure of the group's lead singer of nine years, Rob Dukes, and the return of Steve "Zetro" Souza, who previously fronted EXODUS from 1986 to 1993 and from 2002 to 2004.