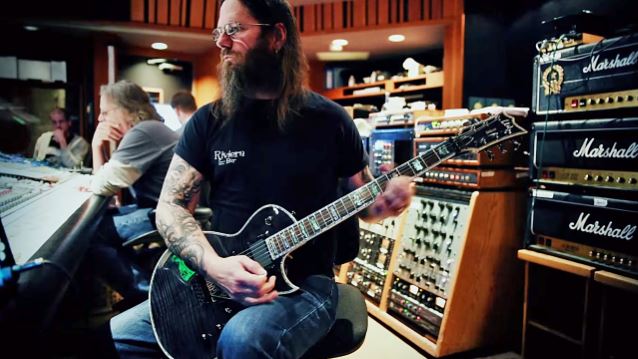 Kristyn Clark of Pop Culture Madness conducted an interview with SLAYER and EXODUS guitarist Gary Holt at a recent stop on the Rockstar Energy Drink Mayhem Festival. You can now watch the chat below. A few excerpts follow (transcribed by BLABBERMOUTH.NET).

On pulling double duty with SLAYER and EXODUS:

Gary: "Yeah, I've been busy. It has its challenges. The main challenges are the physicality of it all and juggling two bands and family. It makes it rough. But, you know, there's a lot shittier positions you can be in than play in two legendary thrash bands and be busy. I could be sitting at home wondering what I'm going to do. Which isn't bad. I'm lazy as hell when I'm at home. Everybody says I'm the hardest-working guy in metal, but at home I don't do anything; I don't wear shoes for five days."

On whether it's ever challenging to switch hats between EXODUS and SLAYER:

Gary: "I've gotta remember which songs I'm playing on a certain night. I know a pretty vast amount of the SLAYER catalog, and, obviously, my knowledge of the EXODUS one is even greater than that. You know, it's all thrash metal to me. As long as I do my homework and show up prepared for a SLAYER tour, I'm ready to go, and they know it. It's, like, I do most of my rehearsing at home. And when EXODUS has work that I can't do, we use Kragen Lum from HEATHEN. I call him my stunt double. They just did five, six weeks in Europe without me, which is, in its own way, sad and bittersweet. Especially when I hear from friends of mine who say, 'I just EXODUS at blah-blah festival,' and I'm sitting in Boise. It breaks my heart a little. When your baby has to move on without you, and I completely, one thousand percent support them and respect them and back them in continuing to work when I can't be there. I remember the first time anybody ever said that to me. I think it was Troy from MASTODON. We were in Europe, I was with SLAYER, and he goes, 'Yeah, we just played with EXODUS the other day.' And I was, like, 'That's the weirdest fucking thing I've ever heard in my life.' A guy who's been on every album and never missed a show, ever, and people tell you they just saw your band play. It's bizarre, but it's worked out well for all of us, and it's kept everybody busy."

On whether there is more pressure for bands to stay out on the road nowadays:

Gary: "Back in the '80s, EXODUS would do an album and we'd tour for a year and then we wouldn't tour for a year, and we wouldn't play. We were under no pressure to be back out on the road right away. We'd write an album, maybe do a couple of hometown shows, maybe fly in and play, like, when they used to have the New Music Seminar down in Los Angeles, or CMJ, or something like that. We'd go and play that. But, you know, it was not an issue to stay home for a year and not tour. And now, it's, like, even the biggest bands have to tour. Even METALLICA is over playing festivals every year in Europe."

Gary: "Some of these young pups, they're on the road constantly. I'm, like, 'Man, I don't know how you guys do it.' It's dedication; they're doing it out of love. But we didn't have that problem when we were younger, 'cause we actually sold albums."

Gary: "It's crushing. It's SLAYER. Although I think there's some new twists to it. When you say, 'It's SLAYER,' you want the fans to know that they're getting what they're expecting, but also, at the same time, they're not getting just a rehash of anything done before. There's some new things going on there, and some pleasant surprises. It's brutally crushing, and the production, I think, is the best on any SLAYER album I've ever heard."