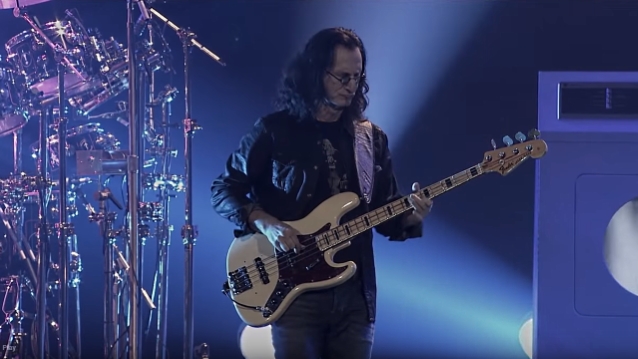 GEDDY LEE On RUSH: 'We Had A Good Run'

RUSH frontman Geddy Lee was asked by Cool Cleveland earlier this week how he and his bandmates managed to stay together for so long without ever breaking up.

"We had a good run — over 42 years," he said (see video below). "And it's a testament to the people in the band. We're all good friends and we all respect each other as players. And we know how to make each other laugh, and that's probably the most important thing."

Lee also once again confirmed that RUSH is unlikely to play any more shows or make new music, more than three years after the band closed out its 40th-anniversary tour.

"There's no plans to reform at this point," he said. "And the future is a wide-open question mark. So, who knows? And I'm really enjoying not knowing where I'm headed."

RUSH played its last concert on August 1, 2015 at the Forum in Los Angeles, marking the band's 25th show at the venue and bringing its final tour to a triumphant end. Drummer Neil Peart was battling enormous physical pain through much of the trek, including a foot infection that made it agonizing for him to even walk.

A few years ago, guitarist Alex Lifeson told Rolling Stone that he receives injections for psoriatic arthritis. He was previously hospitalized for anemia from bleeding ulcers and suffered breathing problems.

Lifeson and Lee have repeatedly said that RUSH will never do a show unless all three musicians agree to take part. They haven't performed as RUSH without Peart since he joined the band in 1974.