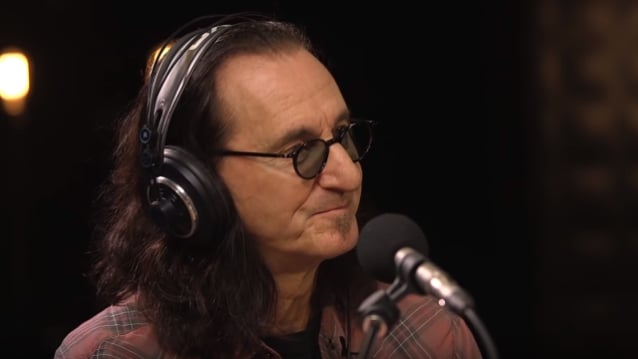 Tom Power of CBC's "Q" recently conducted an interview with RUSH bassist/vocalist Geddy Lee about his new book, "Geddy Lee's Big Beautiful Book Of Bass". You can watch the entire chat below. A few excerpts follow (transcribed by BLABBERMOUTH.NET).

On trying to find the "perfect" bass:

Geddy: "It's the holy grail. I mean, collecting things, for me, is a window into time. You'll notice in the book, anything past 1985 is not so interesting to me. But to capture the period and feel, and to understand what it was like in the '50s to be a bass player and to suddenly see one of these things and to track the evolution of it into the '60s… And then you see what happens when THE BEATLES arrived and all of a sudden, the demand goes through the roof and these companies are grasping for help and the demand far outweighs their ability to keep producing them the same way, so things start to change. So the whole story of it, to me, is a window into my past, in a way. It's the story, again, of the development of popular music, to a large degree. So that fascinated me."

On discovering changes in popular culture while writing his book:

Geddy: "There's a lot of things, there's a lot of styles of music I didn't really know much about. And a lot of these instruments had been verboten to me, by my own decision, because anything that didn't fit into my soundscape was not anything I was interested in. I had friends that played Gibsons, for example, and I never thought they were the right instrument for me sonically, so I just ignored them and I knew nothing about their history. So through this collecting mania, I picked up the first Gibson, the first Thunderbird, and I plug it in and I start playing it, and then I look at it like a completely different thing. Now it doesn't have to fit into my soundscape and I can appreciate it more objectively. What is this thing? Who made it? I need to know. And I imagine in '63, for example, the first time somebody saw a Gibson Thunderbird, they must have thought, 'Where has that landed from?' C'mon, it's such a futuristic thing. And it puts you in the mind of the '60s, and everything was forward-thinking, reaching out for the stars. So it's very reflective of the things that I grew up with."

On what made him want to reach out to fellow bass players for the book:

Geddy: "Well, I felt that a book of just wood, plastic and metal would be just lifeless, and I wanted a reminder, every so often in the book, that they're not just objects. These are things that have given people lives, have made a lot of people happy; they come to life in the hands of a talented musician. I also wanted people to understand the mania of collecting. And I didn't just talk to bass players. That was the hardest decision for me. My partner in this project, Daniel Richler, one of the great arguments we would constantly have was who I should interview for the book. And we knew we only had so much space, 'cause we were already in the process of writing the biggest manuscript that my editor had ever seen. So I thought long and hard about why I should talk to the particular people that we did interview. I wanted to expose people that were influential to me but also that were representative of the period that the collection is about. To talk to John Paul Jones [LED ZEPPELIN] was not only a thrill, as he was one of my heroes, but he could tell what it was like in the music stores of Great Britain in 1960 and what it was like to be a session musician in that period and talk about how he used to stand in the front of the shop windows and stare at this Fender bass in fiesta red. And I know that feeling — nose against the glass, going, 'Wow, one day I wanna have those.'"

On whether he was nervous interviewing legends like John Paul Jones and former ROLLING STONES bassist Bill Wyman:

Geddy: "I'd met John Paul Jones before, and I knew he was a lovely guy, so he was really a pleasure. He was easy. We already had a sort of the beginnings of a rapport, so he was just a pure joy. But sitting down with Bill at first was a bit nervous, yeah. I was a bit tight. And then, of course, he put me at ease, 'cause he's a great raconteur and told all kinds of stories about his life. I mean, that interview could have been 25 pages easily. And some of the other cats were really fun to talk to. The more [interviews] I did, the more fun I was having doing it. I sort of got into the gig, so to speak."

On whether he would have been able to write the book if RUSH was still actively touring:

Geddy: "Let's put it like this: I think he book was very good for me to do. Because it took me out of that context of suddenly the band is not working anymore. What the hell am I gonnado with myself? I had a new project. And I am an amateur photographer, and I am a mental case collector. And so this was a very healthy place to put all those things. And also learning how to produce a book like this was really interesting. I've got a good friend who's big into projects. He always tells me, 'The key to life is projects.' This was a project. And every project that you get involved in stretches your mind, especially when it's new territory. So making a book like this is really not sitting down at a typewriter and sharing your inner thoughts. It's a big Cecil B. DeMille production. And so I had to learn all about publishing and learn about making coffee table books. So it stretched my brain, and that's a good thing."

"Geddy Lee's Big Beautiful Book Of Bass" was released December 18. The standard edition of the 408-page hardcover tome sells for $75 and showcases the bulk of Geddy's personal collection of bass guitars.

Among the instruments showcased in the book are by Fender, Gibson/Epiphone, Rickenbacker, Hofner, Ampeg — and lesser-known-but-influential global luthiers such as Antonio Wandr Pioli, Dan Armstrong and Tony Zemaitis. 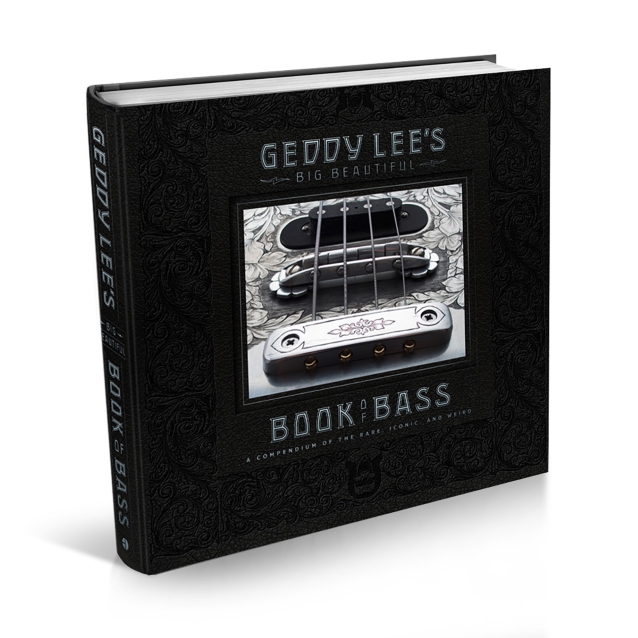