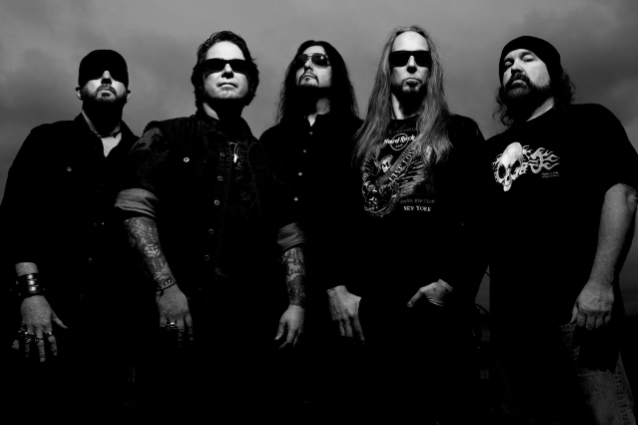 GENE HOGLAN On Next DARK ANGEL Album: 'We're Just Trying To Make The Most Aggressive Music That We Can Make'

DARK ANGEL drummer Gene Hoglan spoke to "Poppitt's Corner", the video podcast of MADROST mainman Tanner Poppitt, about the reactivated California thrash metal pioneers' plans for new music. He said (as transcribed by BLABBERMOUTH.NET): "We've been playing a lot of live shows, and we tend to play festivals 'cause that just kind of works out the best. We're writing the next album, and I've been concentrating on writing that, and [DARK ANGEL guitarist] Jim Durkin is also writing. At the moment, Jim, he's had to take a little bit time off from some live shows, but that was always kind of built into our system. 'Cause when we got ourselves back together, he was, like, 'Hey, guys, just so you know, there's gonna be some times somewhere in the future where I might not be able to make certain shows, or there could an entire run that I might not be able to make. As long as you guys are cool moving forward with it. And we were able to get a good eight years with Jim, at least. So there you go."

He added: "We're just writing, and we're just trying to make it the most aggressive DARK ANGEL music that we can make."

This past August, Hoglan told Oxygène Radio's "Metal Zone" that he and his bandmates were hoping to have a new DARK ANGEL album out "by the middle part of 2023."

Durkin has been sitting out some of DARK ANGEL's recent gigs. He was replaced at the shows by Hoglan's wife Laura Christine.

This past February, Hoglan said during a Twitch livestream from his home that he and his DARK ANGEL bandmates were "in the process" of making a new album. "That's actually one of the reasons I can't be doing TESTAMENT stuff this year. Because, [with] DARK ANGEL, we are writing a record, we are moving forward," he said. "Just a week and a half ago, two weeks ago, I just had Mr. Eric Meyer from DARK ANGEL in this room. We were jamming it out, we wrote a new DARK ANGEL song.

"I've been moving forward with writing. We have gigs coming up, so this year, it won't be heavily, heavily, heavily DARK ANGEL, but now that my schedule's open, I can commit a little harder to some DARK ANGEL gigs," he explained. "We do intend to be in the studio before the end of this year. So I have a lot of work ahead of me, and so does Jim Durkin. He's been sending over songs, riffs, stuff like that, [which has been] super exciting. We're all of the same mindset of making this just the most absolutely kick-ass DARK ANGEL record that we can."