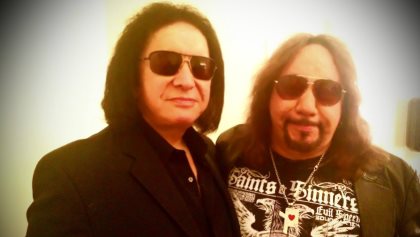 Gene Simmons attended Ace Frehley's concert Friday night (February 3) at The Saban in Beverly Hills, California, marking the first time the KISS legends were photographed together since their 2014 induction into the Rock And Roll Hall Of Fame.

A picture of Simmons and Frehley was posted on the former KISS guitarist's Facebook page, along with the following caption: "MEANWHILE ~ some guy name 'Eugene' crashed Ace's VIP meet-n-greet last nite in Beverly Hills without rendering payment. If any of you Rock Soldiers can identify this man of mystery, let us know!"

Rumors about Frehley's return to KISS gained strength last year after he teamed up with KISS lead singer Paul Stanley on a cover of FREE's "Fire And Water" in what was their first collaboration since 1998's "Psycho Circus".

Asked if there is a chance that he will re-team with KISS, Frehley told "Talking Metal" at the Revolver Music Awards in December: "I haven't heard anything from Paul and Gene — although I did get a text from Gene the other day. He wanted to come see me perform this January. So, you know, maybe he'll pop the big question. Who knows? [Laughs]

Ace's "Talking Metal" comments echoed those he made in November when he told Eddie Trunk of the "Trunk Nation" radio show: "I haven't been contacted [about a reunion]. I'm not ruling it out. It's a possibility, I guess. But the ball's in Paul and Gene's court. If that's something that they would like to do to end off the career of KISS, I think it could be… if it was handled correctly, it could be great. But those guys pretty much run the show these days. And I'm doing my thing, and they're doing their thing. And if it happens, it'd be great, and if it doesn't, I'll be fine and they'll be fine."

Asked why Simmons ended up not appearing on "Origins Vol. 1", Ace told the WPDH 101.5 FM radio station: "Well, I tried calling Gene a couple of times and I got his answering machine. So I shot him a few different texts. I even went as far as to get ahold of Doc McGhee [KISS's manager] and tell Doc to let Gene know I wanted to get ahold of him. And I guess either he didn't get the message or he was just too busy. So I said, 'Well, let me reach to Paul.' I had Paul's cell phone [number] in my phone. I gave him a buzz, and he picked up immediately. And from the outset, he thought it was a great idea and would be a lot of fun. It took a while to choose which song we wanted to do. We were originally thinking about DEREK AND THE DOMINOS' [version of Jimi Hendrix's] 'Little Wing', then we were kicking around maybe 'My Generation' [by THE WHO]. But towards the end of the elimination process, I came up with the idea for [FREE's] 'Fire And Water', and he loved it."

MEANWHILE ~ some guy name "Eugene" crashed Ace's VIP meet-n-greet last nite in Beverly Hills without rendering payment.
If any of you Rock Soldiers can identify this man of mystery, let us know!
Team Ace