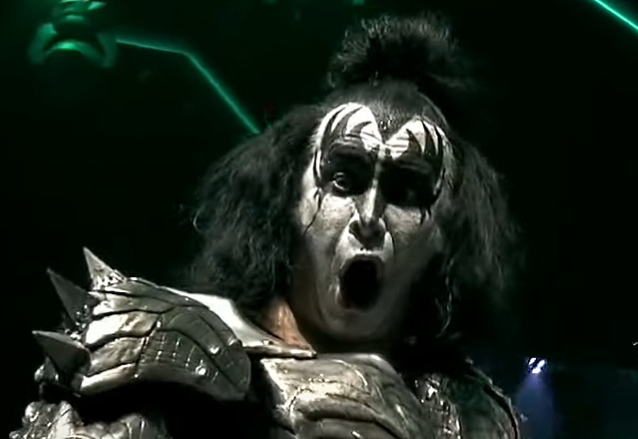 GENE SIMMONS: KISS 'Raised The Level Of What A Fan Can Expect On That Stage For Their Hard-Earned Money'

KISS bassist/vocalist Gene Simmons was interviewed by Planet Rock's Wyatt backstage at this weekend's Download festival in the United Kingdom, and in true Gene style, he covered everything from body hair to retirement, Liam Gallagher to fan tattoos, and why KISS isn't for everyone.

Speaking about KISS's decision to call it quits at the end of the band's ongoing "End Of The Road" farewell tour, Gene said: "It's been coming up for a few years now. And I can wax poetic and prolific about all kinds of things but underneath this veneer is this sort of, 'It's gotta end sometime.' You want to respect the fans enough to know when to get off that stage. And it's gonna be sad, and it's gonna be happy. Sad that you have to leave something that you love so much, but really happy and proud for, 'Look what we did.' We raised the level of what a fan can expect on that stage for their hard-earned money. There's no question about that. So if you see wrestling and there's pyro or Sir Paul McCartney, one of my heroes — anybody that's putting stuff in their shows. I mean, where do you think they got that from? MUNGO JERRY?"

Last month, Gene told SPIN about his post-KISS plans: "Well, we have [the rock-inspired restaurant] Rock & Brews, which is becoming more successful — and quite a few other businesses, which has no relation to sticking my tongue out. And at some point, after the band stops touring, I may go out with the GENE SIMMONS BAND. Did about 50 shows. It's a lot of fun, a totally different experience. It's like being in the RAMONES or U2 or something. You put on sneakers and a t-shirt, and that's all the work. So your heart doesn't have to go 'boom, boom, boom, boom,' like it's going to thump out of your chest, like at KISS shows. If you are a blues artist, you can do that until you're in your mid-80s, the way B.B. King did at 88. Are you kidding me? Me walking around on stage with dragon boots and all that, even past 75, I can't imagine it. The physical wear and tear, your heart just is not going to be able to take it. I defy these guys half my age to get into my outfit, see how long you'll last on stage."