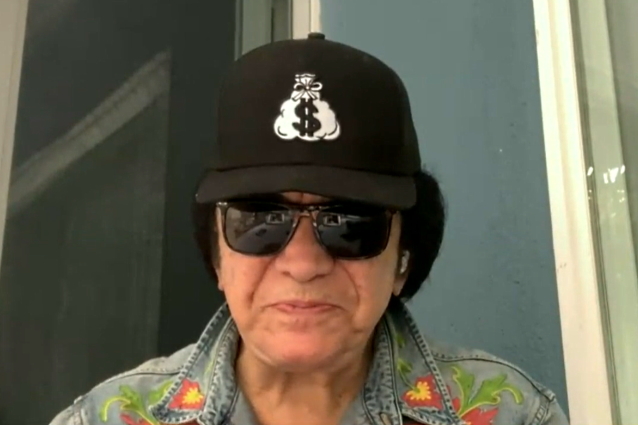 KISS bassist/vocalist Gene Simmons, who tested positive for COVID-19 more than a week ago, gave an update on his breakthrough case during a September 8 appearance on KTLA 5 Morning News. He said (as transcribed by BLABBERMOUTH.NET): "Yes, I did test positive for COVID, but because I got my Pfizer vaccines twice, and because my immune system is really good, I have zero — zero — side effects. Literally, I don't feel a thing. But out of respect to everybody else, I've self-quarantined right here in L.A. And the days have passed — it's now been 13 or 14 days, so I'm perfectly fine. Tomorrow, KISS [will perform] at Irvine. We're gonna shake the heavens."

Asked what reaction he had when he was told that he tested positive for COVID-19, Gene said: "I was shocked. I have to tell you I was shocked, because everything was fine — the energy level was great, the appetite was great — great, great, great. And I never get sick… I don't get headaches.

"You've gotta take care of your health, for all of you," he continued. "Even the Flat Earth Society that believes the earth is flat. There is such a thing, there's a pandemic. Out of respect to your neighbor, out of courtesy, you don't want anybody getting sick. Get tested. Get your vaccines. It's okay.

"I mean, it's shocking that if you're sneezing, and that's not a life-threatening event, you would immediately put your hand up, 'cause you don't want germs to spread. But with COVID, people have a knee-jerk reaction.

"Please get vaccinated," he reiterated. "It's gonna be okay. Get over yourself. It's not about you. It's about the rest of us."

On August 30, he wrote on Twitter: "My COVID symptoms were MILD compared to many others and let me tell you… It kicked my ass. It's over now."

When Stanley first tested positive on August 26, KISS said the whole band and the crew members who are traveling with them on the tour are fully vaccinated.