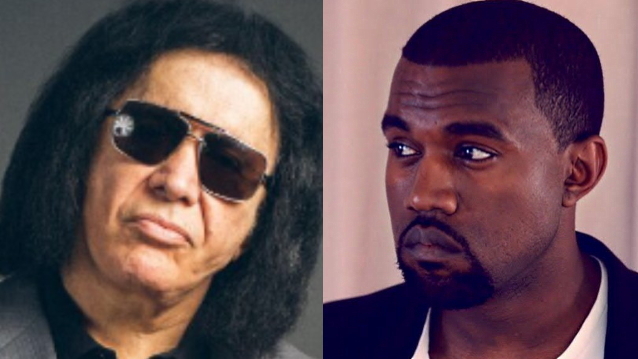 GENE SIMMONS Says KANYE WEST Is 'Out Of His Mind': 'There's Something Clinically Wrong With Him'

Earlier this month, West made headlines when he released a music video for his song "Eazy", which included scenes of him kidnapping and beheading Kim's new man. The video's lyrics read, "God saved me from that crash, just so I could beat Pete Davidson's ass."

Simmons weighed in on the Kim-Kanye drama on Thursday (March 3) when he was approached by a TMZ cameraman at Kings Road Cafe in Los Angeles. He said (as transcribed by BLABBERMOUTH.NET): "For the record, [Kanye's] a talented guy. There's no question about it. He's out of his mind… This is your wife, the mother of your children. It's not childish. There's something clinically wrong with him, as he's admitted."

Asked if he thinks Kim and Pete should file a restraining order against Kanye, Gene said: "You don't need to do that. Pete's a cool guy [who] takes the high road. Just ignore it. At a certain point, if everybody misbehaves, they get bitchslapped…

"It's, like, guy, you've got a roof over your head, you've got food in your tummy. You can do whatever you want. Get a hobby. That's better. Leave him alone. Move on. Love your kids. Love the mother of your kids and let her make her own decision. She's a grown-ass woman now and she doesn't need your permission."

Simmons also addressed the fact that Kanye has been hanging out with a new woman who looks a lot like Kardashian: model Chaney Jones.

"Being like that publicly, getting a Kim lookalike, it's childish," Gene said. "And it's not fair to this girl who happens to resemble Kim. Good for you. You can resemble anybody or anything, but don't be a hand puppet to somebody who's playing some kind of game.

Kanye, who is now legally known by his nickname, Ye, was diagnosed with bipolar disorder after being hospitalized for a psychiatric emergency in 2016.

West and Jones were spotted in public a few weeks ago, with many pointing to how similar Jones and Kardashian look. However, a source close to both parties told TMZ that they are not official, although West was reportedly "undeniably drawn" to Jones because of her appearance.

Prior to hooking up with Jones, West had a brief relationship with "Uncut Gems" actress Julia Fox. The two reportedly broke up in the middle of February, with Fox taking to social media to explain how she still has love for him, but was never in love with him.