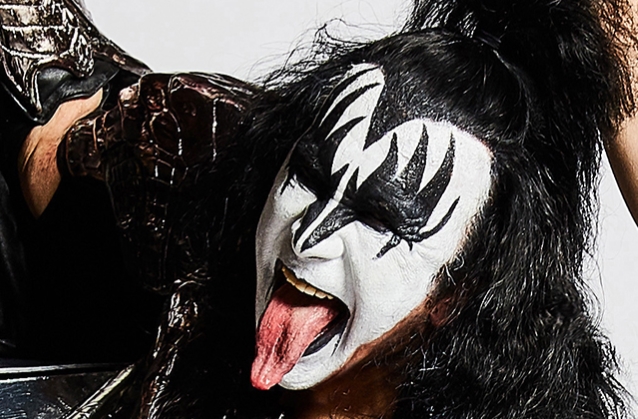 In a brand new interview with KTLA anchor Frank Buckley, KISS bassist and vocalist Gene Simmons was asked if the band's upcoming "End Of The Road" tour will truly be fans' last opportunity to see the iconic rockers perform live. "This is real," he responded (see video below). "Folks play that game," apparently referring to other bands who have announced farewell tours, only to change their minds at a later date. "And I'll tell you why it's real. Because I'm 69; I still have some hair on my head [and] lots more on my back. It has to be [real], because I wear seven-, eight-inch platform boots; our outfits… mine wears at least 40 pounds; I've gotta spit fire and fly through the air and do all that kind of stuff. I don't like heights, so if you put [Mick] Jagger and Bono, who are both great, and you stick 'em in my outfit, they'd pass out in a half hour. We're the hardest-working band in show business — period. This is a good time to go — have some dignity, go when you're doing… So this is gonna be a long tour — two to three years… maybe longer. Two, three years we're gonna stay out there while it's still good. The last thing you wanna do is introduce yourself, and we have been, for 45 years, 'All right' — put in the city — 'you want the best. You've got the best. The hottest band in the world: KISS.' Why would you wanna do that when they [see] four fat guys walk out there with the jowls hanging off of 'em. No, you don't wanna do that."

In September, KISS announced its "End Of The Road" farewell tour on NBC's "America's Got Talent", and two weeks ago, the band revealed the first set of dates and cities in North America, produced by Live Nation. International markets were announced simultaneously.

The North American leg of "End Of The Road" will launch January 31 in Vancouver, British Columbia, Canada at Rogers Arena and will hit an additional 43 cities.

As most fans remember, back in 2000 and 2001, KISS already performed a "Farewell Tour". The trek, which was the last to feature both Ace Frehley and Peter Criss, played 142 shows over five legs, covering North America, Japan, and Australia.

Stanley has hinted that Frehley and Criss could make appearances on "End Of The Road", but KISS hasn't promised anything beyond a longer set and newly designed band costumes.