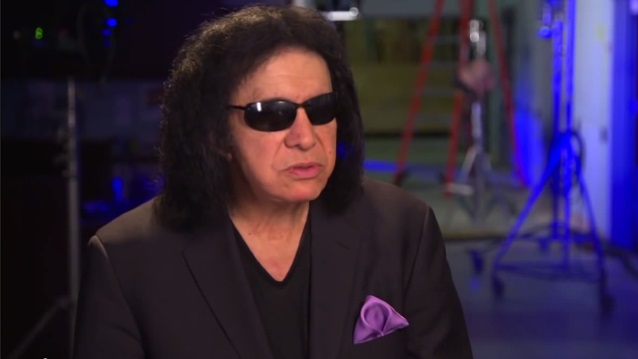 In a brand new interview with The Tampa Tribune, KISS bassist/vocalist Gene Simmons was asked if the band would ever consider reuniting with former members Ace Frehley (guitar) and Peter Criss (drums) "if they ever cleaned up their act." "Not a chance," he replied. "We've already danced that dance three different times. No way will we reunite. It wouldn't be fair to [current KISS members] Tommy [Thayer, guitar] and Eric [Singer, drums]. It wouldn't be right."

Simmons also spoke about KISS' induction into the Rock And Roll Hall Of Fame and the band's refusal to perform unless Thayer and Singer were involved.

"We have no reason to complain," he said. "We're the luckiest sons of bitches to walk the face of the Earth. If the Rock And Roll Hall Of Fame added us or didn't, it didn't matter to us. We only did the induction with Ace and Peter because the fans wanted it. But it was a slap in the face that they didn't acknowledge Tommy Thayer and Eric [Singer]. They've been in the band longer than Ace and Peter. If THE GRATEFUL DEAD can have 10 members in and out of the band and a lyricist, who was never in the band in the Hall, how can you explain that? Or how can THE E STREET BAND get inducted into the Rock And Roll Hall Of Fame? THE E STREET BAND? Well, then why not THE SILVER BULLET BAND or THE HEARTBREAKERS. I don't get it."

Although all four original members of KISS came backstage at the Rock Hall induction for photo ops, Frehley was the only member to come back and talk to the press. Asked how he felt about Ace speaking to the media after KISS posed for photos as a group, Gene said: "His demons are his own. He leads a Jekyll-and-Hyde sort of existence. He has a new album coming out, and I wish him well. I wish Peter well, too."

Despite their hard-rocking image, Simmons and KISS guitarist/vocalist Paul Stanley never succumbed to the pitfalls of drugs and alcohol. Over the years, Simmons has never hidden his feelings about drug use, even when his bandmates were involved. He told The Pulse Of Radio that drugs are the number one reason for bands failing to live up to their potential. "I have no sympathy at all for anybody that doesn't have enough self-respect for themselves and for their bandmates, because when one guy decides that his dalliances with crazy things is more important that the welfare of his band, that guy doesn't deserve any success," he said. "Because a team is a team, and every guy's gotta carry the weight. You're only as good as your teammates."