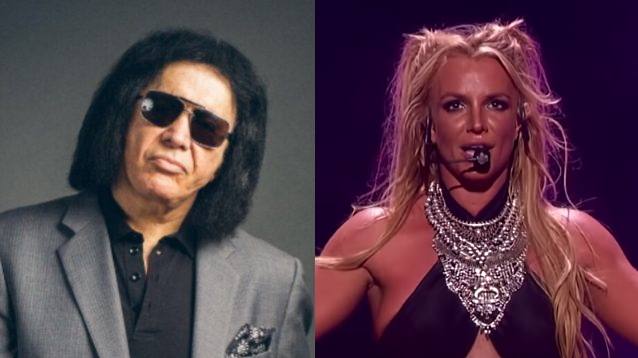 GENE SIMMONS Weighs In On BRITNEY SPEARS's Conservatorship Battle: 'No One Should Have Any Say Regarding Her Finances'

KISS bassist/vocalist Gene Simmons has seemingly thrown his support behind pop singer Britney Spears in her conservatorship battle, which saw her finally speak out last year after 13 years locked into a guardianship that left her few freedoms, including financially.

Britney and her family have been at war over her conservatorship, which controlled her personal affairs and estimated $60 million estate from February 2008 until its termination in November 2021.

Earlier today, Gene took to his Twitter to share a TMZ article about Britney's estranged father's request for her to sit for a deposition, and he included the following message: "Ok. Not usually an area I comment on. But here goes. @britenyspears_earned her money the hard way — she worked for it…No one, including parents and family should have any say regarding her finances. Period."

In a June 2021 court hearing, Spears famously said about her family: "My dad and anyone involved in this conservatorship — and my management, who played a huge role in punishing me when I said no — ma'am, they should be in jail."

Britney's fans fought to end her 13-year-long conservatorship with the #FreeBritney movement.

Last month, Britney took to her Instagram to open up on sensitive subjects involving her family, and how the power of prayer and reflecting on her career accomplishments are helping propel her forward.

"I had an experience three years ago where I stopped believing in God," Britney wrote, according to People. "From every angle I was being hurt for no reason and my family was hurting me. I went into a state of shock and the way I coped was being [in] fake denial. It was too much to really face.

"Honestly my family embarrassed me and hurt me deeply," she wrote, adding that "tooting my own horn and seeing my past accomplishments reflecting back at me actually helped" in overcoming her insecurities — appearing to reference how she listed her achievements the week before in a separate Instagram post.

Ok. Not usually an area I comment on. But here goes. @britenyspears_ earned her money the hard way — she worked for it…No one, including parents and family should have any say regarding her finances. Period. https://t.co/CnXEFknNTZ