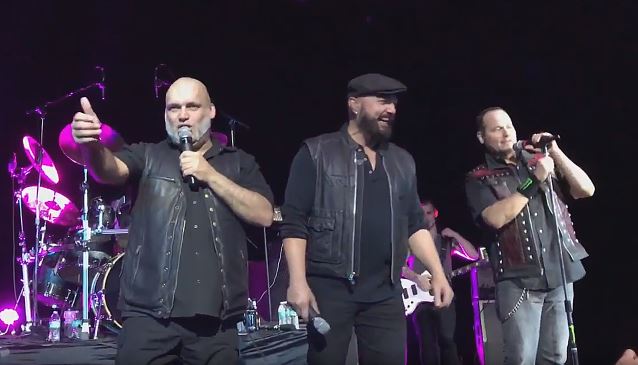 Regarding how the "Trinity" tour came together, Tate told Rockin' Metal Revival: "I have this new project called OPERATION: MINDCRIME. We wrote and produced and put together a trilogy of albums, and 'Resurrection' is the one [that just came out]. There's a track called 'Taking On The World' that I thought would sound great with some different voices on it. I called up Ripper and Blaze who were both coming through town. We hooked up and had just a great time singing on this particular song. As we were working on it, we started talking about, 'Wouldn't it be fun to maybe tour together at some point?' We loved the idea until we started to put together our schedules, which are crazy. We're all going at different places, different times, so the only time we could get all three of us in the same country was around Thanksgiving in the northeastern part of America. That's when the first dates of the tour will take place. I'm looking forward to it. It's going to be three incredible singers getting together for an incredible, memorable night of metal."

Asked what fans can expect from the shows, Geoff said: "We're each going to be doing a set of music from the band's that we were in. I'm doing QUEENSRŸCHE, and Tim's doing JUDAS PRIEST, and Blaze is performing IRON MAIDEN, then we're going to be joining each other onstage and harmonizing with each other and singing together on some songs. It's really kind of fun; we played around with it in the studio when we were recording. That's what led up to this. We had a great time. It's just three people who get along famously and have a lot of laughs.

"We're going to share the same band. It's going to be, I think, incredibly memorable because we're all very accomplished in our own ways and have very unique voices. But the three of us together are incredibly cool. It's a really different kind of sound. I think probably the coolest thing about it is that we have a lot of fun doing it."

Tate told The Metal Voice that he hoped to take the "Trinity" tour to more cities and countries after the current run. He said: "Well, the biggest challenge that we have of doing a tour together, we found, is all three have very extensive touring schedules, so getting us all lined up to be in the same place, it's really quite an undertaking. So we managed to get, I think, ten dates, to start with, in the Northeast in the end of November. And we're gonna try to book some more in other parts of the world. It's kind of a challenge to do that at the moment, but we're all kind of working towards doing that, 'cause we enjoy the project so much. So we're gonna see if we can extend it and add it to some different places in the world."